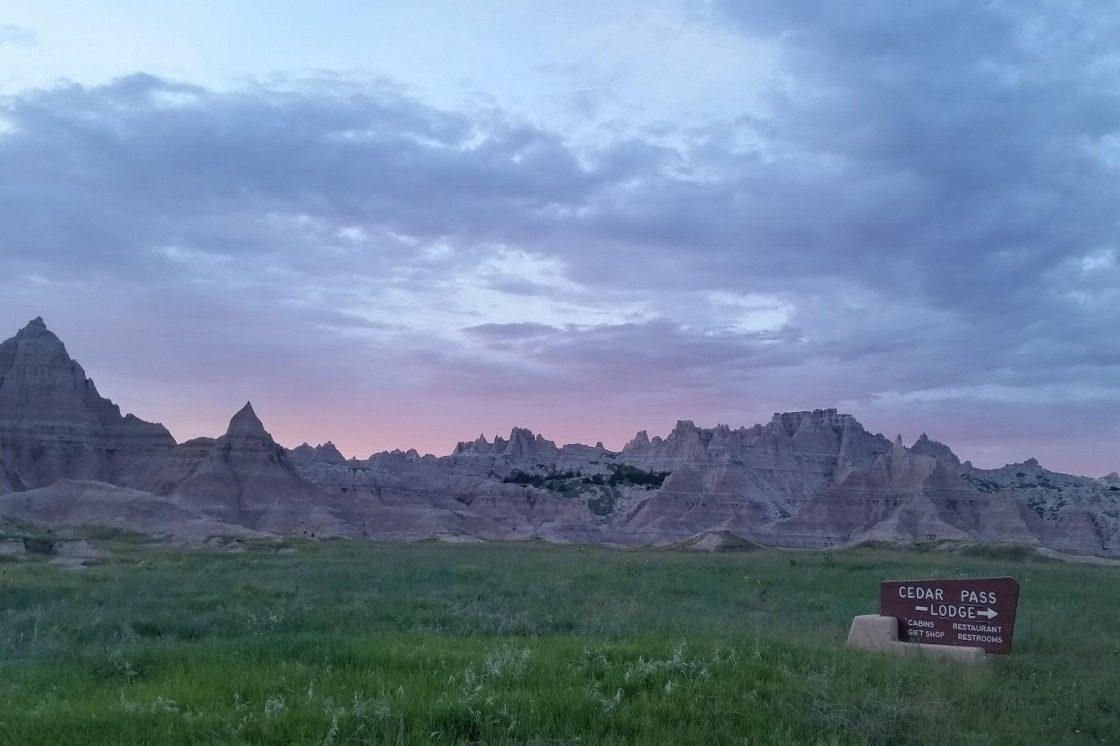 A scenic drive and epic sunset in SD

This morning was yet another early 7am wake up call, but for good reason. Today we were leaving Denver for greener pastures which included passing through 4 different states.

After a shower and a quick breakfast, we hit the road for The Badlands in South Dakota. This was a 7-hour journey in the car, but we were expecting some absolutely breathtaking scenery along the way.

As we drove through the mountains we kept rising in altitude, up to 12,000ft at one point, which made it pretty hard to breathe not being used to it.

The mountains were stunning and probably the best scenic drive we have had on the entire trip so far.

Next we leave Colorado and enter Wyoming, but not for long as we crossed into Nebraska.

We had originally planned to visit Omaha in Nebraska last week, but plans were changed to go watch that Timberwolves match and then the Rush concert.

So now was a good chance to go through Nebraska without taking too much time off the schedule.

We stopped in a town called Caldron which seemed ok, but run down at the same time. Along our travels, we stopped into a Wallmart to buy some apples, berries and some chips & salsa dip and then it was on to our final destination.

Back in the car, we try to program the GPS to take us to our campground in The Badlands, but for some unknown reason it was not showing up. We had no network coverage on the mobile phone so we had to go park next to a McDonalds and scum off there free WiFi.

Finally, back on the road! The brilliant scenery continued as we went through plenty of grasslands.

The sky and clouds we unlike anything we’d seen before and we could have taken a million photos of it and never been able to capture how nice it looked.

We arrive to our campsite around 5pm which was located right inside The Badlands national park. It was a pretty basic campground, however we rank it as one of the best we have been to due to how nice it as. We were literally in the middle of nowhere and it was so peaceful.

It didn’t take us long to setup our tent and to have a quick rest, before we went for an explore. We find the information building and chat with one of the rangers named Larry. This guy was a deadest legend.

He was an old fella who had retired after 43 years of teaching chemistry in Charlotte, North Carolina. We get chatting with him for a while and he gives us advice on hikes to do and different ranger programs we could do.

It was now about 6pm so we didn’t have much daylight left. We went for an explore on two of the hiking tracks called The Door and The Window which gave epic views of The Badlands.

We then came back for some tea in the restaurant. It was a great feed, but the staff need a little crash course in urgency as we had to wait around for ages and nearly missed the sunset.

Luckily we made the sunset, just. This was good because it was probably the best sunset we’d seen in our entire life. After watching that we head to one of the evening programs where Larry did a little talk. Such a nice guy! We even got to meet Smokie The Bear.

Then we heard a story about prairie dogs and other information about The Badlands. We even got to do some stargazing with one of their telescopes and got to see Venus.

After a long day we head back to the tent. It was a perfect night, not too hot and not too cold, a pretty rare occurrence so far on this trip when camping. We go to bed excited knowing that tomorrow is our Mt Rushmore visit.

More Photos from The Badlands