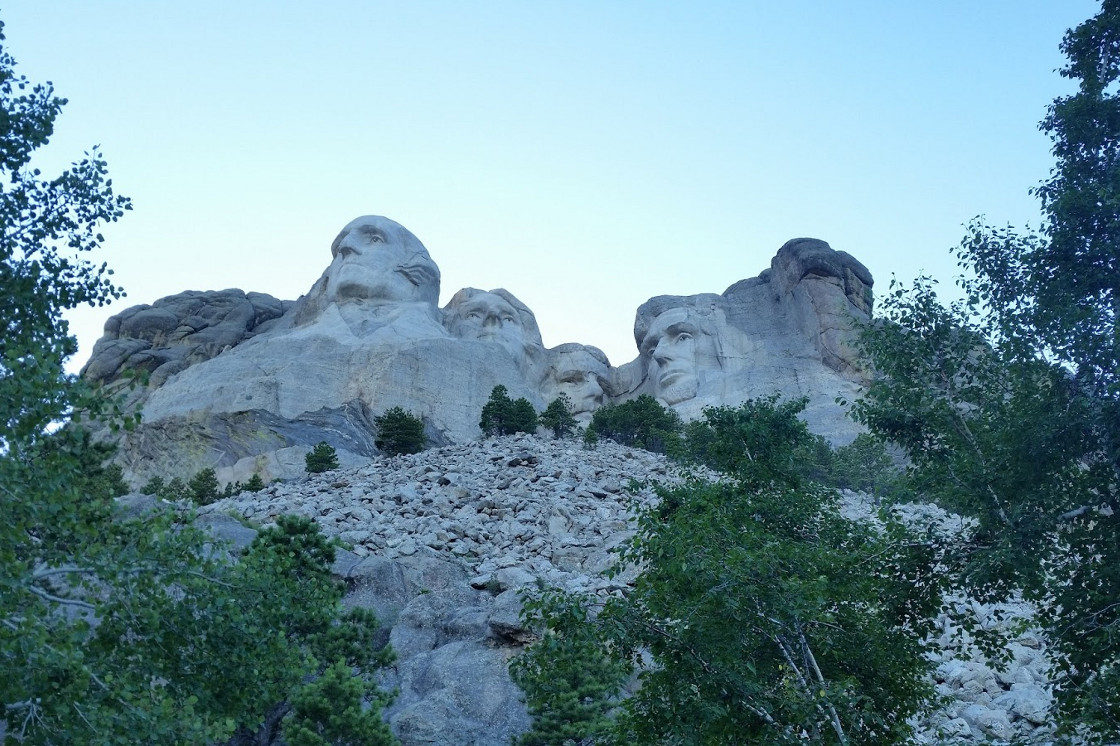 Finally a night in the tent where it wasn’t freezing cold or boiling hot, with a slight breeze and a nice warm temperature we slept like logs and we’re ready for a day of exploring the Badlands and then later on, checking out Mt Rushmore.

We get our tent packed up and loaded into the car and then make our way to a geology walk/talk that started at 8:30 with our favourite ranger Larry.

On our way to ‘The Door’ trail we get held up with construction of all things on the park road and had to wait 10 minutes until we could get through, luckily Larry knew about the hold up and waited an extra 15 minutes for us late comers, what a champion!

We learn about how the formations of The Badlands were created and could touch and feel the different types of rocks and mosses around the area.

Most of the formations were made by volcanic ash that come from a volcano that was about 400 miles wide which is just insane.

40 or so minutes later we finish up with Larry’ talk and make our way right over the other end of the park to a talk about fossils with another ranger who was interrupted mid speech by a little herd of big horn sheep making their way up and around the formations.

After learning about what types of animals were living in the area millions of years ago we head out on our own a little ways down the road to the ‘Saddle Trail’.

Up up up we climb until we were at the very top, the view from here was magic, we could see the formations going on forever as well as miles and miles of grasslands.

It being a pretty hot day we were glad to be back in the air conditioning after our hiking around, so we drive back to the visitor center to check out their fossil room where a tail palaeontologists were working on real fossils found on the badlands.

Time to leave this amazing place we take the two and a half drive to Rapid City where we will get to see Mt Rushmore, something that we had been looking forward to for a long time!

We try and check into our hotel but our room wasn’t going to be ready for another 2 hours so we head out for lunch.

Luckily there was a TGI Fridays just across the road so we hold up there until it was time to head back over and finally check in we were both buggered from the mornings hike.

After a long rest we jump back in the car and make tracks for Mt Rushmore, just a quick thirty minute drive up a windy road we pull into the parking lot, eager to get up the stairs, not knowing what to expect.

We walk along a walkway framed with the flags of every state in the U.S, and then there they are, the four most influential presidents carved into the side of Mt Rushmore, it was HUGE.

Next, we find a trail that leads up and under the mountain and through the forest, a different perspective to see the carvings from underneath. Along the way we find a few very adorable chipmunks and one very friendly prairie dog, still no bears though!

Getting hungry we drop in to the little restaurant and fill up on soup and salad and use their WiFi and catch up on some news as we hadn’t had any internet for a few days now.

There was a great information center at the park where we learn all about how the states of the USA come together and also learn a little more about how the sculpture was made.

There was also some good info on the four presidents and how they influenced how the USA is how it is today.

Coming up to sunset we grab an ice cream from the famous ice creamy inside the park and head down to a giant Amphitheatre to see the lights getting turned on once it got dark.

Before this though, a ranger come out and harped on and on about how awesome America is, then we watched a quick video giving us a rundown on how Mt Rushmore was chosen and carved out which was really interesting until they started singing patriotic songs and then got everyone up to sing the national anthem.

Then the lights come on and lit up the presidents faces against the pitch black sky which gave them a real eerie look.

Time to hightail it out there as there was about 2000 people in the Ampitheatre, we leave early after the ranger asked for all servicemen to come down and do some folding of the flag ceremony.

We take this as a good opportunity to beat the traffic and it worked like a charm, we were out and back on the road within minutes leaving behind a very full car park of mayhem.

Back in the hotel now we settle in for the night with another big drive to North Dakota at Theodore Roosevelt Park and nothing night in our favourite tent.

Other Photos from Mount Rushmore

Where we Stayed at Mount Rushmore