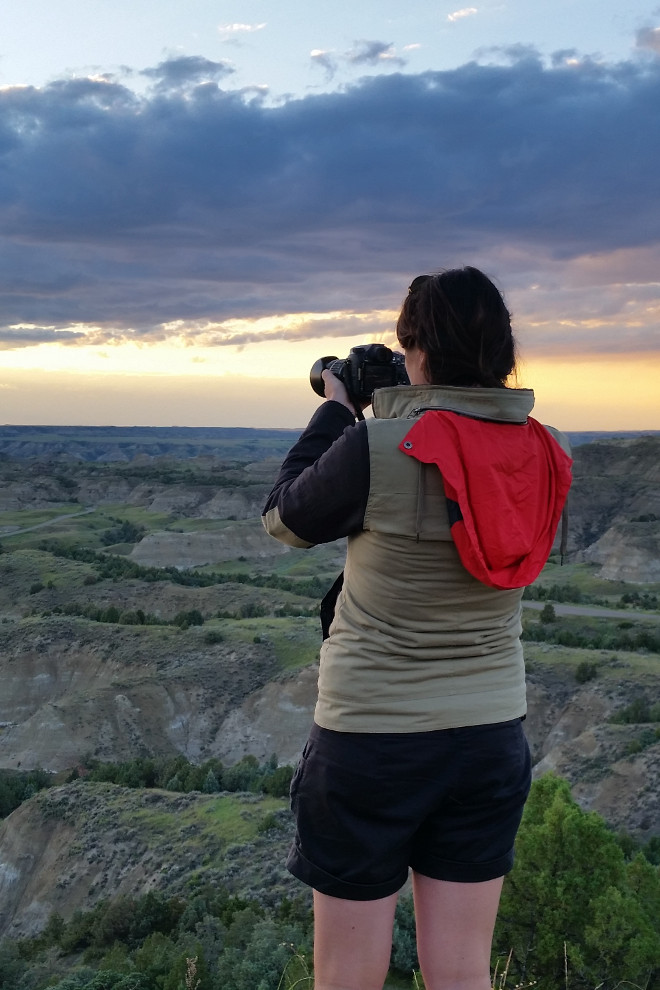 Tired from all our hiking up and down the badlands trails we reluctantly roll out of our tent and get started on packing up. luckily now we do this on auto pilot and it only takes about 15 minutes from rolling up the sleeping bags to loading the tent up in the car.

Luckily now we do this on auto pilot and it only takes about 15 minutes from rolling up the sleeping bags to loading the tent up in the car.

Next stop is the Theodore Roosevelt National Park in North Dakota where The Badlands continue but without as much erosion and with a lot more greenery which will make for a less desert like landscape and more to our liking.

A smallish 4-hour drive today which always flies by when we swap every hour, only stop once for fuel and grab some supplies of chips and salsa for our lunch for when we arrive.

We find the campground office which is closed so we do as the ranger says and drive around squinting to read the small pink reservation cards from the car window until we spot our name at site #5.

It had been raining on the way up so the grass on our site was nice and wet for us, luckily we have our trusty tarp to put down under our tent to save a lot of hassles at pack up time.We set up in a very private little cove with an amazing backdrop of the very lush badlands out in the distance, this may just win as the most scenic tent site yet!

We set up in a very private little cove with an amazing backdrop of the very lush badlands out in the distance, this may just win as the most scenic tent site yet!

We chow down on our chips and salsa, this time making sure we buy the mild salsa as they don’t kid around here with their temperatures here.

Then we make our way back to the car and head just around the corner to the visitor centre to loan our day.

Deciding on driving the big loop around the park we stop at a few trails along the way, the first couple being smaller lookout type trails and the third one, our favourite, took us all the way up on top of the mountains giving us a 360 view of the entire park. We earmark this one to come back to later for the sunset.

On our travels around the park we see a whole colony of prairie dogs, drive through a herd of buffalo which was amazing, see a little gray fox and a herd of mustangs, it had been a safari of a day!

Feeling quite ravenous we head into the little town of Medora and find a restaurant form their very limited selection and order up some breaded mushrooms and a souped up Hawaiian pizza off a very nice foreigner waiter with mesmerising pure gold eyes.

After drinking about 3 huge glasses of iced water we were watered and fed and it was time for the sunset!

Driving the 7 or so miles back to the trail we make our way back up to the very top, happy to see that no one else was up there waiting and we had the view to ourselves.

The sunset was madness, the clouds contributing to the colours of grey, pink and red it was one of the nicer sunsets we had seen and it literally stretched around the entire park as far as our eyes could see. We had a 360 degree view of the whole thing as well.

Sitting until it started getting dark, we thought we’d better head back as we had an evening night walk planned with a ranger, unfortunately the silly bugger told us the wrong meeting spot so we, and about 5 others, missed out on the walk altogether.

Not a total loss though as we met some really nice folks from Fargo and Maryland.

We finally catch up to the group and catch the last 2 minutes of his talk about night vision and then get led to a parking lot where they had 3 telescopes all set up for us, Adam being in his element was about as happy as a pig…

So we stayed here gazing at Saturn, Andromeda Galaxy, Sirius, a double star and a few more galaxies that were around 22 million light years away.

Adam was picking the poor rangers brains about everything to do with space until about midnight when they started packing up, we took the hint and headed back to the tent as best we could as we had no idea what parking lot we were in.

Stumbling around the campground armed with only our phone torch we eventually find our way back and tuck ourselves into our tent, it had turned into a very cold night to we made sure to pull the sleeping bags up nice and high.

Where we Stayed at Theodore Roosevelt NP