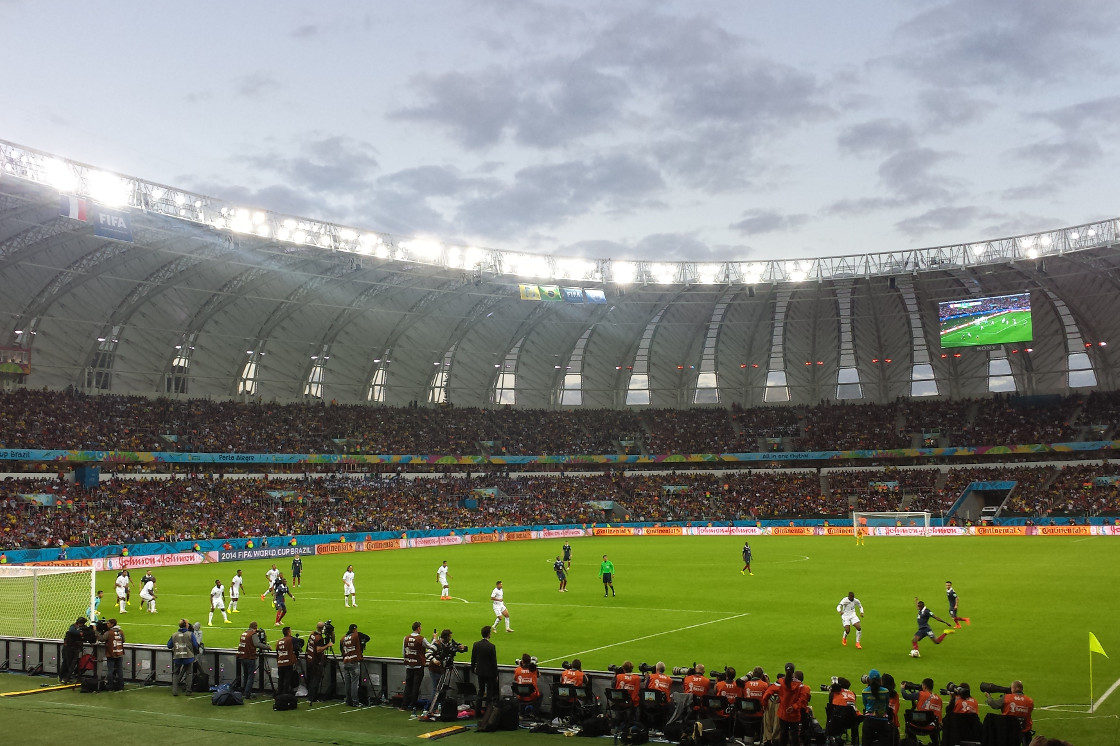 A very quick breakfast at 5:30am and it was back on the bus and off to the airport to catch our flight to Porto Alegre.

Flying in, the city looked huge! We could see the stadium and the live fan site from out the window.

The city was a far cry from the small city we just come from so we were keen to get out and explore.

We pull up to our new lavish hotel but can’t check in quite yet, so we out our bags in storage and head to Beira-Rio Stadium to watch France vs Honduras.

We jump in a taxi and tell him to take us to the stadium and he starts going on about a camera and photo, riiiiiight…

So I pointed to the map to make sure he was going where I wanted him too and he just smiled and said “Si Si”.

He ended up taking us up a hill that overlooked the stadium and the while city, it was beautiful, the cheeky taxi driver treated us to an amazing view and after that dropped us about 2km from the ground due to the roads being shut.

This was good as we got to join in the march of the France and Honduras fans who were chanting and waving flags the entire way.

It was an awesome experience to check out the cultures of some of the other fans.

Once arriving at the ground we were pretty impressed. It was a fairly modern stadium and we had awesome seats right near the corner flag, giving us a great perspective of the game.

Unfortunately the speakers in the ground weren’t working so we missed out on hearing the national anthems and the opening music. But once the match started the stadium was absolutely buzzing.

France controlled the tempo from start to finish and were relentless. They received an iffy penalty early on which Karim Benzema converted.

Then we were part of football history when the first ever goalline technology was used.

Benzema hit a shot off the post into the goalkeeper, who then thumbed it over the line. Unlike the AFL goal technology back home, this decision was done within 2 seconds. France then added a third goal to round out a deserving 3-0 win.

We then walked from the stadium to the live fan site which was about a 30 min walk. We stopped for a drink and some food along the way and enjoyed plenty of festivities along the way including live music, carnival rides, food stalls, Brazilian samba dances, you name it.

The fan site was incredible though once we arrived. There would have been several thousands of people there and we watched the first half of the Argentina vs Bosnia match, before heading back to the hotel for the second half, plus Game 5 of the NBA Finals.

It was a fair walk home, but there were plenty more festivities. We were walking alone towards the end, but all those stories about how rough and dangerous the Brazilian streets are were pretty much scare tactics. The people here are awesome and friendly.

Tomorrow we have a big day planned checking out a local school where a Fanatics 11 team take on a local team, then later that night we are heading out to see a concert with an Australian super group performing, with the band lineup to be announced that night.