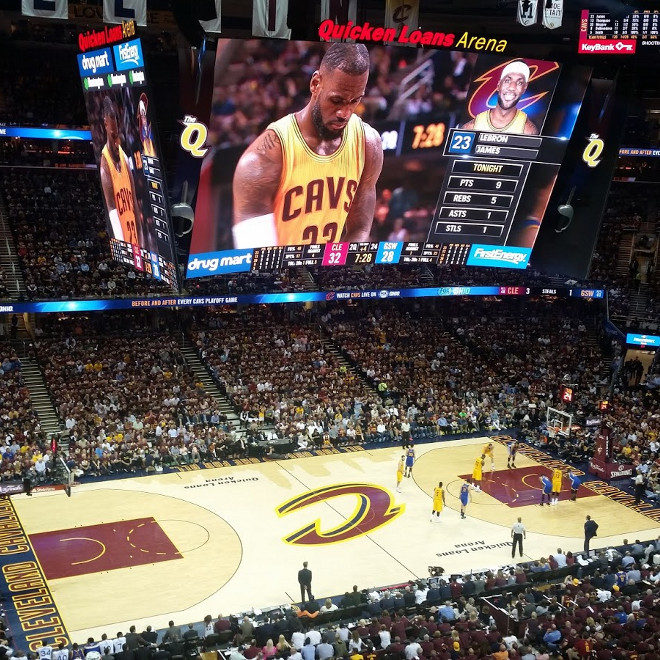 We’re going to the NBA Finals!

It was finally matchday! We had not been blessed with luck this trip with sports and we had consigned ourselves to missing out on our fix of some NBA action, but an early gift from Santa Claus changed that.

Santa Claus, of course being the city a few days earlier that we visited a day early because of the rain. This change in schedule meant we were only a 5hr drive from Cleveland and now seeing an NBA match was a possibility.

It wasn’t just any match though, it was Game 3 of the NBA Finals which was already turning into one of the best series of all time. The first two matches went to overtime, the first time in history that has ever happened.

We decided to book some accommodation in Akron (about an hour outside of Cleveland) and head to the match. Having not even got tickets to the game yet, we arrive in Cleveland about 2pm.

Parking was ridiculous with some places charging as high as $70 Australian just for parking. We were crafty though, we drove about 5 mins out of the CBD and found $8.50 all day parking. Bingo!

With tip off at 9pm and the day already getting on a bit, we jump on StubHub to look for some tickets. When we had looked last night there were heaps of tickets but at a huge cost. Now there were heaps less, but prices had come down slightly.

We bit the bullet and bought some tickets in Row 1 in the Upper Tier, probably paying 5 times what they were originally worth. But hey, who cares, this is one experience we’d regret missing forever if we didn’t do it.

Purchasing the tickets was easy, but actually getting the tickets were a nightmare. We had to register an account with some third party site to acquire them and after a long time on the phone to the help desk, we finally had sorted it. Yay!

Now we had a few hours before the game so we decided to go soak up the atmosphere. We checked out the Cavs team shop, headed to a Mexican restaurant for tea, then headed to the special live fansite they had set up with live music and events.

It was now finally match time! We go find our seats and they were kick ass. Next to us were a couple of brothers who were Cleveland locals and were the friendliest people ever.

We spoke to them a while and then enjoyed the player entrances and the national anthems etc.

This was such a huge match. Cleveland had not won the title for over 40yrs and were missing two of their best players through injury, but the home fans feel they are on the verge of something special with the series tied at 1-1.

The match itself was incredible. We had a great view and it was just high octane basketball from start to finish. The skills were absolutely incredible, but perhaps one of the best things was the reception Matt Dellavadova got.

Born in Maryborough, the largest cheers of the night (aside from LeBron) were for him. He delivered too, with 20pts and a match winning play right at the death. 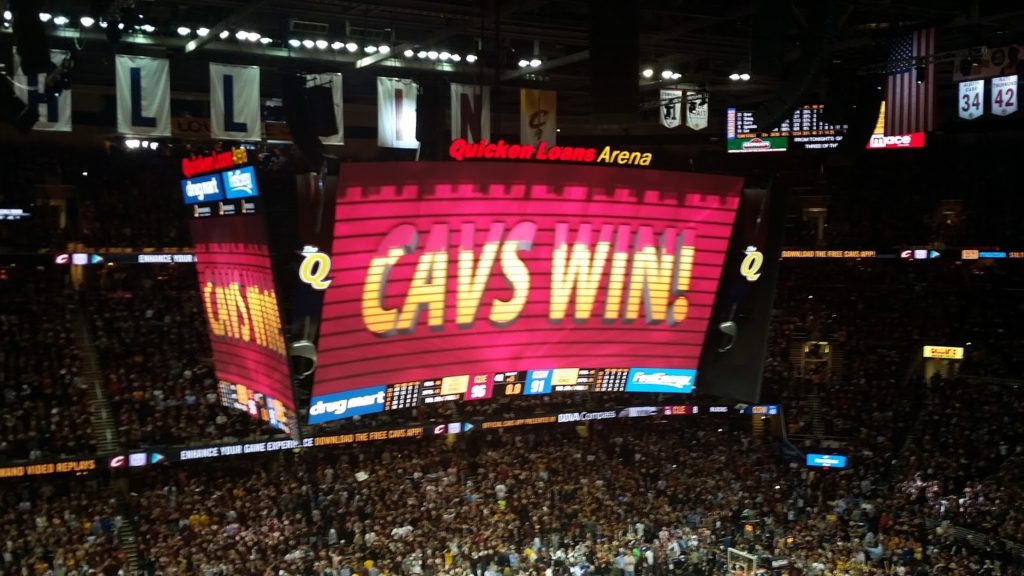 Cleveland led for the majority of the game, leading by as high as 20pts in the third quarter, before the inevitable Golden State comeback. Delly had kept Steph Curry quiet for 3 qtrs, but Curry exploded in the last.

The margin was 1pt with a couple of minutes to go, but the home team hung on to win by 4pts. It was a brilliant match and we were glad we made the detour and paid the money to go.

At the end we decide to go down the bottom to have a look at the court, but the guard didn’t let us in. That was until he heard we were Australian and then he said he was heading over to meet the Dellavadova family.

We got to meet them all and stand courtside right where the media were doing their post match interviews and television stuff. This night was now complete! We even walked past Kevin Love in the street on the way back to the car!

Now we had a loooong 1hr drive back to Akron and by the time we got back in it was 2am. But it would go down as probably one of the best nights we have ever had.

Where We Stayed in Cleveland