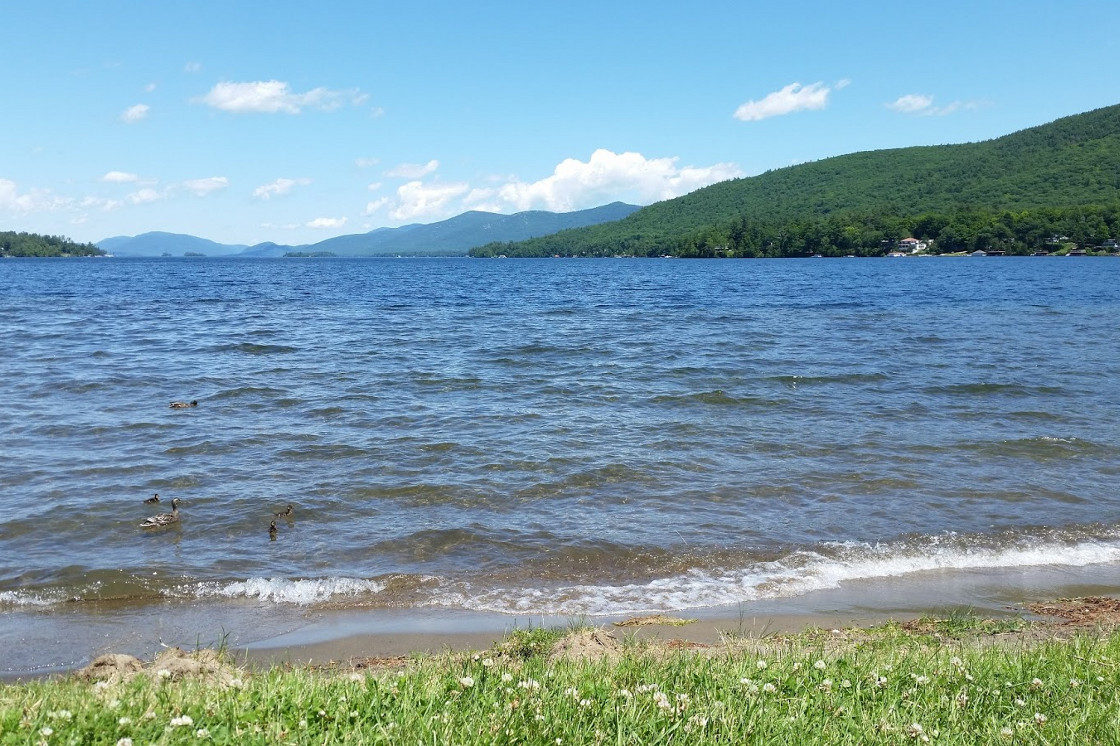 Lake George and a Bouncy Ball

We wake up around 8:30am, pack our tent up and make our way back over to the Quechee Gorge all excited for a long hike, walking for about 20 minutes the trail is starting to get a bit over grown, and then it gets worse, and then there’s a giant log blocking our way.

So we figure that we’ve taken a wrong turn somewhere… Trekking back we get to a crossroads, how is this not labeled?

Not wanting to get lost we decide to make our supposed 2 hour trek a 40 one as knowing us, we would get terrible lost and die somewhere in the Vermont wilderness.

So back in the car now we sheepishly drive out of the visitor center and make our way to Lake George back in the good old state of New York.

This place was your typical beachy town with arcades, mini golf and a flurry of little restaurants and cafes sitting on a beautiful lake front, this was our sort of town.

After checking in we make our way to our tent site. It was right down the bottom running along a fence that had smelly rubbish behind it, yuck!

We find a spot to set up and then go for a wander through the park and out the back entrance to get to the lake, all the while enviably looking at all the tree lined tent sites along the way.

We walk along the lake front which was quite long, the lake spans around 40kms all the way around so it was quite substantial compared to our little lake Wendouree.

After a lot of menu reading and rejecting we end up at a little sandwich cafe and order up a chocolate milkshake and what was a really good sandwich.

Returning to a nice shady spot along the lake we sprawl out and relax for a good hour, Adam having a nap and Linnie watching a little kid getting told off for openly peeing right on the shore, he got the naughty spot for 5 minutes, thankyou super nanny.

Feeling refreshed we decide to have an arcade tournament, first to win 3 games in each arcade would be the winner.

First up was basketball which Linnie very uncharacteristically won, then air hockey which Linnie also won, with Adam now getting worried he wanted another go at the basketball…

Finally he won, so with the score now 2-1 it was do or die for Adam. Going old school we face off at the ball in the hole game where you roll a ball up an alley and try to get it in the rings with the moms to points.

In a nail biter it came down to the last throw and Linnie was victorious winning by 50 points!

The next arcade was much the same, and so was the final score with Linnie winning quite comfortably at 3-0. The prize was a big bouncy ball which turned out to be quite entertaining to bounce around for the rest of the day.

Next up we thought we should get some history in so we walked up some stairs to the Lake George Fort which was used back in the England Indian war back in the 1750s. It was a pretty cool tour, we got to see a real musket being loaded and fired, which was damn loud!

Then we got to go to the very top of the fort and see how they loaded a cannon and then they fired that off as well which was even louder!

The tour over we just wandered the fort looking at all of the exhibits until the announcement went over the speaker that the fort was closing for the day, so we decided to head back to the tent for a breather, bouncing the bouncy ball the entire way.

Enjoying our restful town of Lake George we make outer way to Dinner which ended up being at an Italian place and sit outside to people watch, there was a very interesting mix of people.

Now it was game time 3, mini golf, surely Adam would break his losing streak as he hadn’t lost a game so far this trip. We opt for the harder course that had a USA States theme which fit our holiday perfectly.

Linnie took the lead early, the harder course proving to test our skills to breaking point. Hole after hole with rotating logs, windmills, doors that opened and closed, and even rotating carousel that you had to hit the ball through, it was tough.

It come down to the last hole and all adam had to do to clinch the win was get it into a ‘subway station’ hole that would wipe 4 strokes off his score card, the exact amount that he was down by…

Could he do it? Close, but no cigar, Linnie had taken the 3rd win for the day.

Time for bed now we head back to the tent, it had been a great day of competition and with Niagara Falls on the cards for tomorrow we nod off to sleep excited to see it again.

Where We Stayed at Lake George