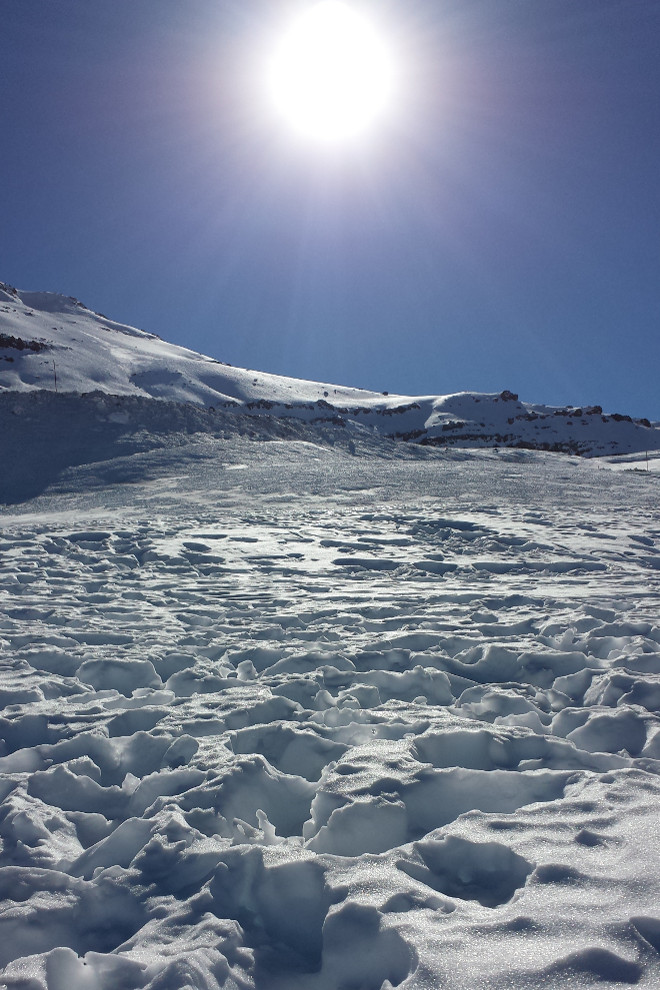 Our trip to The Andes

Today was our trip to The Andes. We had to get up early and meet our bus driver at 8:15am for what was a 1-2 trip up into The Andes.

We rugged up as we had since found out that Santiago is one very cold place!

Along the way we stopped for some breakfast at a BP equivalent and we stocked up on M&M’s, chips and some drinks.We also had the chance to hire some snow boots and waterproof pants which later turned out to be an inspired purchase.

We also had the chance to hire some snow boots and waterproof pants which later turned out to be an inspired purchase.

With all our supplies now purchased the next stop was The Andes, finally. We went along some very narrow and windy roads which were reminiscent of our trip to Cusco, but the scenery here was absolutely amazing.

There were some epic houses in the hills which we have no idea how they got built.

Now we were starting to get high and the green grass was now covered in white snow. Our first stop was a little town which was basically just restaurants and snow skiing shops, along with the chance to ski if you wished. We only had about 40 minutes here to explore, but it was good fun.

It was then back on to the bus and the tour guide said we were in for a treat as we got to go to a stop that they normally don’t go to.

We stopped by the side of the road in a paddock of snow and got to go exploring which was great. After a mini snow fight and falling over a few times in the snow, we had our fun and headed back to the bus again.

Our last stop was at the top of the hill where all the hotels, lodges and restaurants were, along with their famous snowfields. It was about midday and we had until 4:30pm to explore. After a bit of a walk around we found somewhere to have lunch and luckily they had the World Cup on.

Mexico were taking on the Netherlands and we got there in the second half right before Mexico scored to go up 1-0.

We ordered some soup and hamburgers and settled in for the game. The Mexicans held a 1-0 lead for most of the second half before conceding a very late goal just before injury time.

Then Arjen Robben took a dive in the penalty box and the Dutch received a penalty. They score in the 94th minute and claim a 2-1 win despite the disgust of many fans inside the restaurant. After that we decide to head on and do some more exploring.

We found a little snowfield and had a pretty cool snow fight, with snow everywhere from our hair down to our backs.

Some Canadian’s walked by and got some photos of us and we spoke to them for a while. They were pretty nice.

Time went pretty quick and we were then back in the bus. It was a long trip home, not getting back till about 6pm. We checked the scores from the Costa Rica vs Greece game and it was 1-1 after 100 minutes, but for some strange reason we couldn’t get coverage on our hotel room television, so we set off looking for somewhere to watch it.

After looking everywhere and realising we were going to miss the shootout, we walked past a phone shop which had a tv. We huddled at the window with about 50 others right when the shoot out started. Costa Rica ended up winning 5-3.

It was now tea time and given our hotel had a kitchen we decided to make a home cook meal. We found a local supermarket and made some stir fry and cooked mushrooms which was absolutely beautiful.

It was our last night of the holiday which was pretty sad.

More Photos from The Andes