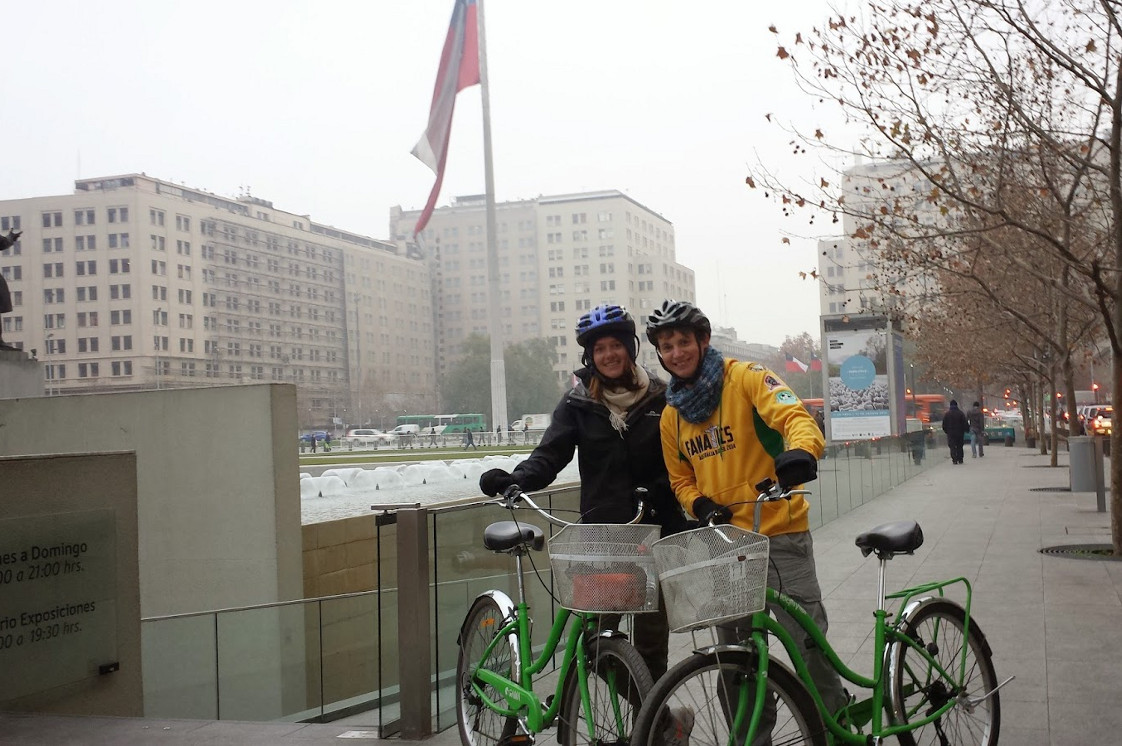 A bike ride and a long plane flight

Ahhh, it was finally here, our last day in South America. Luckily we had a pretty big day planned which included exploring the city of Santiago one last time.

We decided to pack our bags early and after being here for a few days already, the room and our clothes were still covered in confetti from the soccer match a couple of days earlier. This stuff was almost impossible to get rid of!

For today we had a bike tour planned which would start at 2:30pm and go until about 5pm.

Our flight was at 2am so it was going to be a very long day indeed, so we wanted to make sure we were tired so that we could sleep well on the plane.

Again we went exploring, but it was a bloody freezing day so we had to rug up.

Even Adam had gloves on which was a rare sight. By now it was about midday and we had found a nice little outdoor restaurant with heaters that had the France vs Nigeria match playing.

So we settled in here for the match, but later had to bail given it was absolutely freezing outside. We walked about 100 metres only to find a nice little cafe that also had the game going, but inside and with the heater going. Doh.

We watched the second half in here and ordered some coffees and a delicious yoghurt cake. France went on to win 2-0 which was pretty cool given we had seen France play twice live already this tournament. By the time this finished it was about 20 minutes until our bike ride, so we headed off.

On the way Adam dropped his phone smashing the screen, so it was not a great start to the bike ride. Luckily it was still usable so we were able to get some good photos still.

We met with out tour guide, a young girl in her early 20s named Nacha who was super nice. She had just completed university and was an English teacher, so that was good news for us given hardly anyone in Chile spoke English.

Nacha took us around the city and showed us all the parks and famous political areas. Along the way we even picked up a friend; a stray dog who followed us for about 75% of the way.

Even when we stopped and went inside buildings, this dog would wait for us and then follow us again.

He seemed like a pretty nice dog, but at one intersection he went off and then come back with a pigeon in his mouth. He ended up killing it and leaving it on the side of the road as we were driving off. Not something you see every day!

It was a great tour. Chile has so much history, some of it pretty gruesome, and Nacha taught us heaps while keeping it nice and up vibe.

We even stopped for a hot chocolate half way which was fun and she told us how much she loved soccer and how shattered she was when the Chileans lost to Brazil.

She gave us some ideas of how to spend the evening, telling us of this epic shopping centre just up the road. It was epic indeed, with about 8 levels of shops, so we settled in here for a few hours.

We found a Hard Rock Cafe and watched the end of the Germany vs Algeria match, which Germany won 3-2 after extra time.

Then we went exploring to kill a few hours and then came back to Hard Rock for tea. We both ordered haystack salads which we usually do when we go there. We then had another hour before going to the airport so went exploring some more.

It was then back to the hotel to collect our bags and then head to the airport. We booked a taxi which we were told would take 15 minutes, but after 35 minutes of waiting we decided to get one ourselves.

Once we got to the airport we saw a massive line of people and yep, it was of course for our flight which had been delayed for 3 hours….

Luckily we were flying Premium Economy so we cut to the front of the queue and bought ourselves into the lounge. The wait was pretty good, Linnie made a bed and went to sleep and there was plenty of free food and drinks to be had.

So instead of flying at 1:50am, we took off at 4:30am in the end. Within minutes of boarding the plane we were both sound asleep and missed breakfast. Before we knew it we were back in Sydney, and then in Melbourne, and then in Ballarat.

It was about 3pm by the time we got to Ballarat, so rather than go home we went to the movies to see 22 Jump Street, then it was time to finally head back home.

What a superb trip, some memories that will last forever and this blog has captured all the best bits. We can’t wait to look back on here in years to come and relive it all again.