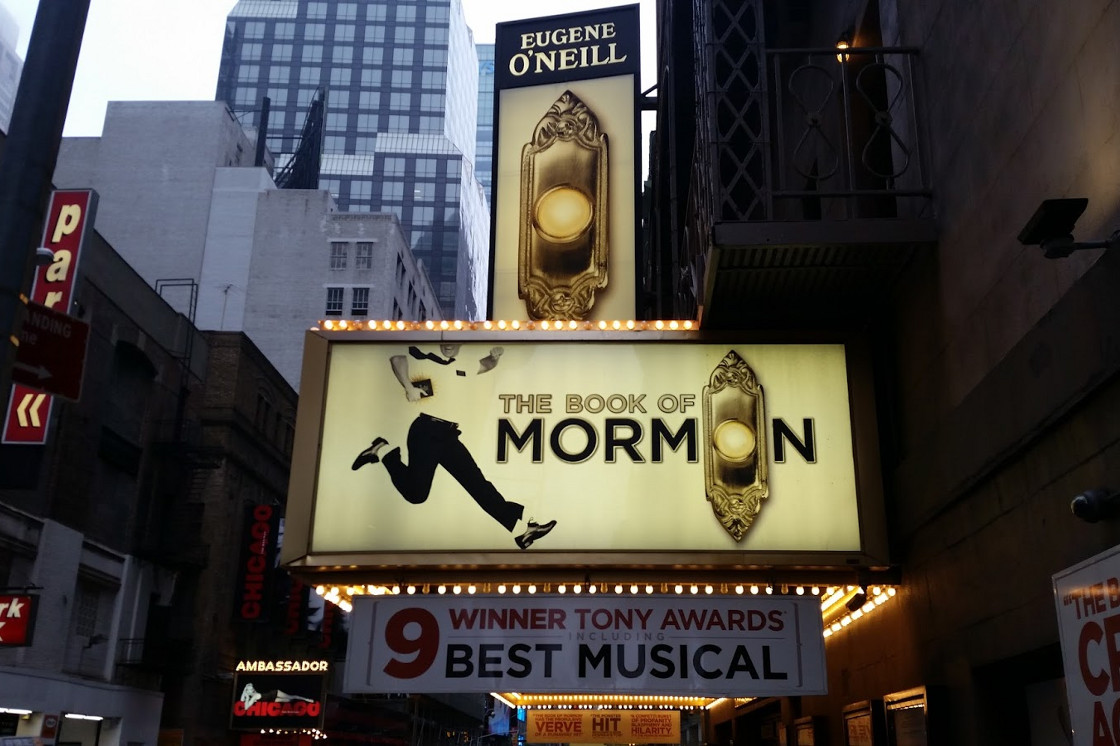 The Book Of Mormon

After a very long day of walking and exercising the day before, we thought we would not set the alarm and have a sleep in and just wake up when we wake up.

This was a day we were excited about though, it was Book Of Mormon Day!

We awake at 11:30am feeling refreshed, but a little annoyed we had wasted the morning. But not to worry. It was going to be a great day.

Feeling a bit hungry we decide to stop into some restaurant for brunch, which is not quite lunch but a bit past breakfast. It was ok but not the greatest quality so we left feeling still a bit hungry.

The Book Of Mormon was at 2pm and we still had an hour or so until the show, so we decided to look around the city a bit more to kill some time until the show.

We had high expectations for the show given it had won so many Tony Awards, including Best Musical, plus the fact we had friends who highly recommended it. It was written by the same guys who wrote South Park and given the theme was taking the piss out of religion, so we knew it would be good.

It certainly didn’t disappoint either. One of the song titles was “F*@K You God” while another was about how Jesus should man up and take his crucifixion on the chin, so you start to get the idea. Again, this was good.

That may sound a little crude, but they did it pretty well so as not to offend to much. It was basically about how a long lost third chapter to the bible was found in America back in the 1820s and these Mormons go to Africa to spread the word of the new bible.

But along the way truth and fiction get blurred and they rewrite it with a few lies because the African people found it boring.

So the new version the Mormons were preaching were just made up stories to entertain the Africans (which they all believed as gospel). Not too far from real life really…

After the show we stopped by a hugely popular baker/cake type shop and got ourselves a cupcake which was delightful, before going for another little walk around town.

But after ages of ducking and weaving traffic and people who are incapable of walking straight and walk straight in front of you, we started to get a bit sick of wondering about. So we went for a coffee and then back to the hotel for a rest.

It was now tea time so we went for a burger and baked potato at a restaurant in 36th street, pretty close to the Empire State Building. We did have plans to climb it, but given it was so foggy we would not have been able to see anything.

We walked back up to Time Square, went for a bit of a shop and had one last look around before deciding to get a nightcap. It was at a place called Stardust where the waiters stand on the tables and sing. It is apparently world famous and was quite good.

Then it was back to the hotel at about 11pm. A lazy end to our last night in New York, but we were real tired and had a very early wake-up call the next day. There was a movie called The I Inside on which we watched before heading to sleep.

This more or less marked the end of the first half of our trip. Next up were the northern states of America!