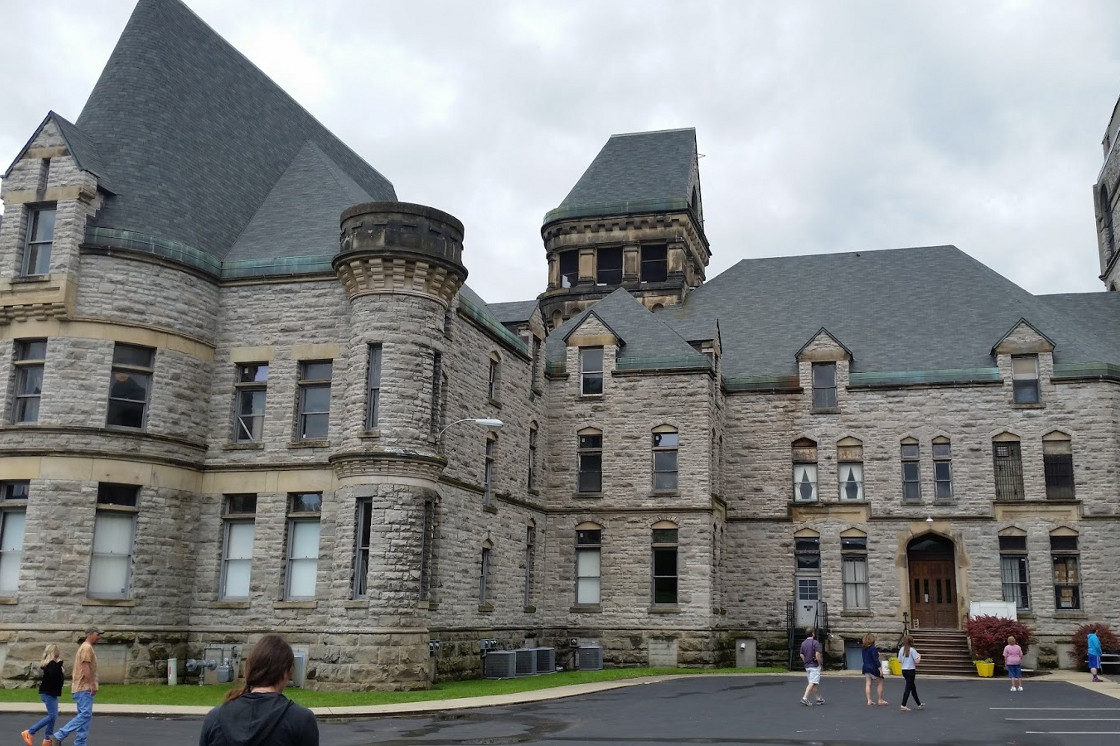 Shawshank and a change of plans…. Again

Just after Cleveland was starting to feel familiar it was time to move on, this time we were headed to Fort Wayne in Indiana.

Before we get there we make a stop to a little know place called Ohio State Reformatory, better known as the prison from The Shawshank Redemption.

After just missing out on the very first ‘Hollywood’ tour of the day we have to wait another hour and a half for the next one, so we take the self-guided tour around the prison.

This place was huge and truly creepy, being a working prison from the 1890s up until 1990 it had been abandoned since then and it really showed. The building was actually scheduled to be demolished until the town historical group bought it and took it on.

From peeling paint on every surface to very old cramped cells, we tour ourselves around each room, wing and hall until it was time for our main tour that showed all the filming locations from the movie, we were very excited!

Our first stop on the tour was the office of the evil warden, they had all the original props still in the room including the exact same wall safe.Then it was just a couple of rooms over and we find the room where Brooks and Red lived after they got out of prison, they just put up a fake wall, threw a bed in and boom, you’ve got an apartment.

Then it was just a couple of rooms over and we find the room where Brooks and Red lived after they got out of prison, they just put up a fake wall, threw a bed in and boom, you’ve got an apartment.

It turns out that with the hundreds of cells that they could have used for filming, they ended up constructing their own wing with cells that faced each other, all of the cells at this prison faced windows, apparently it was better for the chemistry of the characters. A very expensive thought.

Next up we got to see the hole that Andy dug into the wall and the ‘tunnel’ that he crawled out of, all they used was a section of pipe and filled it with chocolate sauce and sawdust to make it look like sewerage and the hole was just a meter of cement with a hole through it and a shelf to rest the camera on while filming, magic!

Lastly, we saw the solitary cell that Andy was kept in, we got to go inside and it was very dark and depressing, it would drive you nuts.

The prison is also well known as being a very haunted location with plenty of ghost sightings and eerie experiences.

One such spot was an empty room with a chair in it which moves when you exit the room. Whether it’s true or not, it certainly felt creepy inside and gave us the chills.

Back on the road now we drive about an hour to Fort Wayne in Indiana. We had planned to camp the night here, but when we drove in and saw the local baseball pitch underwater and broken tree branches all over the nature strip, we thought we better check the weather report.

Lucky we did as thunderstorms we expected. So we decided to get the hell out of there and make yet another detour.

We find a city named South Bend about an hour and a half north, famous for the Notre Dame university, so decided to book some accommodation there and then hit the road again.

That was not before having some more Jimmy Johns and heading on over to a Wallmart across the road to stock up on some supplies.Linnie certainly stocked up, buying 9 packets of chewies, while we also got some carrots and apples and stuff.

Linnie certainly stocked up, buying 9 packets of chewies, while we also got some carrots and apples and stuff.

It turns out the rain was a blessing, as our hotel here was awesome. They had free cookies, our room had a lounge, kitchen and a balcony. We made good use of the pool and the hot tub and just over the road we had a great little restaurant called Evil Czech Beer, great name and great food.

Sad not to be camping the night we had made the most of our change in plans and get a great nights rest. Having driven 90 minutes north of where we should have been (in Fort Wayne), it meant we only had an hour to drive in the morning. This was very handy!

Where We Stayed in South Bend