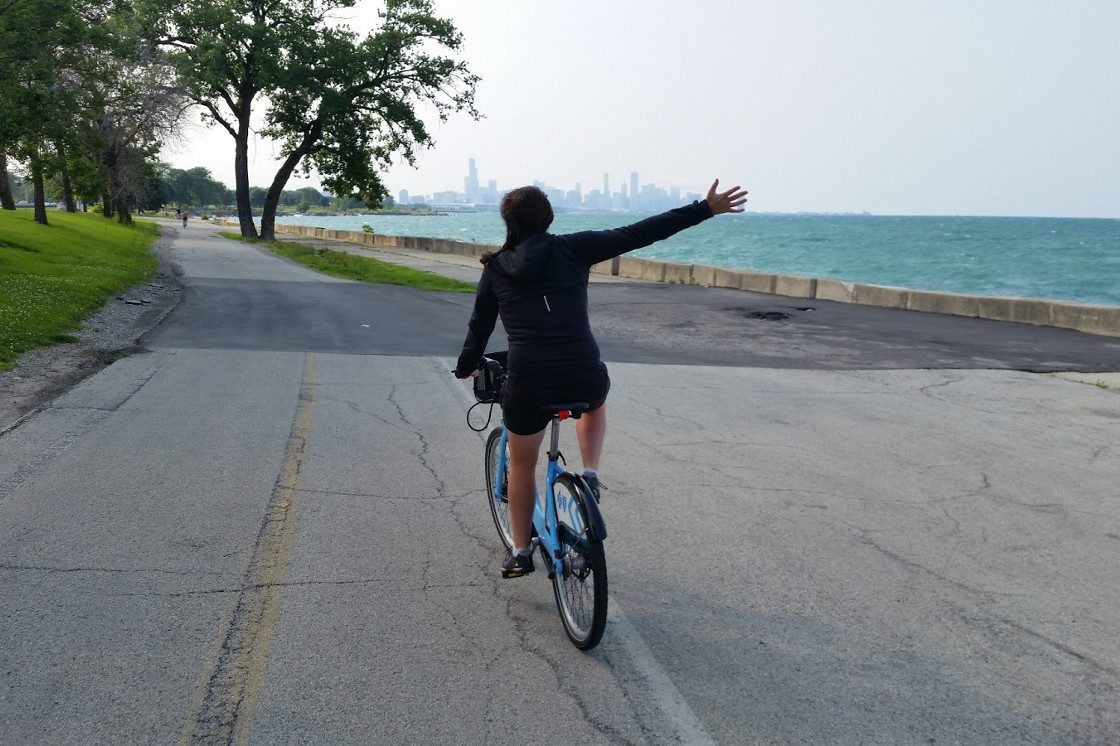 Today was going to be another very busy day so a quick stop at Starbucks for breakfast was on the cards.

Walking up to the other side of Chicago to our hotel we have to catch a Chinatown trolley to the Museum of Science & Industry which was actually bigger than the three places we went to yesterday combined.

After waiting nearly an hour for this trolley that was supposedly due in 15 minutes we get decide to go for a quick walk over the road where we can see some market tents and sure enough it was a little farmers market right in the middle of the city.

Keeping an eye out for the trolley with one eye and scoping out some goodies with the other we find a punnet of raspberries that were too good to pass up and after we devour them the trolley pulls up, thankyou fate!

Our streak of weird tour guides continues with this guy, he literally does not stop talking the whole way, we even had a few sentences with himself and even blurts out a bit of road rage.

We go past President Obamas house which was surrounded by secret police, the tour guide practically forced us to take a photo he was that excited.

Then we see Muhammad Ali’s house, and a nice guy that he is he even built a house for his sister and one for his mum right next door to him, naaaaw.

Finally we arrive at the museum and eventually find the entrance, we grab a map and get started.

We go floor by floor and see a multitude of experiments, info on how humans and life in general evolved from practically nothing 5 billion years ago.

There was yet another whole room full of space exploration, pretty much a suped up version of the museums that we had been to the day before.

We have a lunch of soup and burgers and then it’s time to see our movie about, yep you guessed it, Adams favourite, Space Exploration.

It was actually really interesting and clued us in on NASA’s plans to finally get a ship to Mars pinning it down to this generation of astronauts, pretty exciting.

Meandering around for a little while longer it was time to head back, instead of taking the weirdo trolley again for fear of our lives, we decide to use the city bikes and ride back to the city.

That being said, I don’t think google maps took into account the ridiculously strong head winds that we had the entire way home that crippled our eta. The 40 minutes turned into about 90 and out poor little legs were buggered.

Nearing dinner time now we decide to refuel our tired bodies with some serious steak at the one and only Michael Jordan’s Steakhouse.

We quickly head up to our room to change and then make our way up the street, 5 minutes later we were being seated in a pretty swanky establishment.

Welcoming the bread basket we dove right in and then it came, the nicest steak we’ve had in a very long time. If you ever go to Chicago, go here, you won’t find a nicer steak.

Feeling full and content we struggle with the want to go back to the room and relax our sore legs but we decide to push on and finish the very last attraction in our city pass book, the Sky Deck.

Willis Tower was the biggest building in the world for a few decades but even still the view from this place was amazing, you could see the lights from other states stretching all the way from over Lake Michigan, it was pretty epic with the lights in all directions seemingly going on for miles and miles.

Soaking up the amazing view we make our way down the elevator and stroll the city at night until we see the giant trump tower, our hotel being right next door it was our landmark so we didn’t get lost, good on Mr.Trump for having a big enough ego to make your building not only stand out but be visible from pretty much everywhere.

A quick coffee on our level 2 free snack area (which has chips and salsa, m&ms, banana chips and biscotti) while we print off our tickets for the cruise coming up in a few short weeks and it was time for bed, I dare say we will sleep well tonight.

Where We Stayed in Chicago