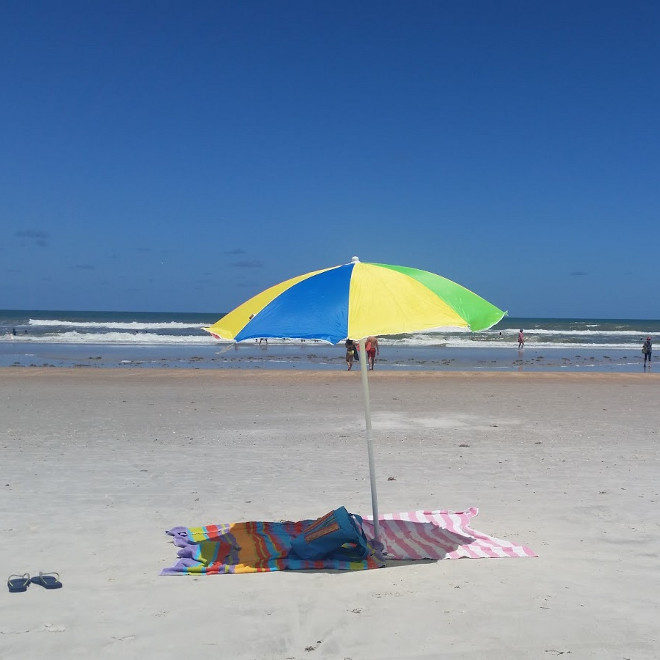 Peace and quiet in Historic St.Augustine

Checking the clock overnight, what seemed like hours had gone by, it was only 1:24am. Not being able to go back to sleep after the tirade of snoring, (which sounded like a chainsaw) lights and screams from the nearby amusement rides we get up for a toilet break only to find a line up for showers.

Seriously, who is showering at this time of night? There were 6yo old kids waiting there with their parents, talk about backward hicksville southerners…

Trying to get some sleep we wake up at 6am and decide that enough was enough, we pack the car and head for the greener pastures of St Augustine and we weren’t disappointed when we got there.

The pasture was not only lush and green but we were smack bang in the middle of the state park, this is what real camping is all about.

After setting the tent up, we smother ourselves in sunscreen and head straight for the beach.

Arriving the beach wasn’t half as white and soft as Panama City Beach, the sand was full of shells and there wasn’t much of it with the tide all the way in. We try and fail to put the umbrella up until a nice lady lets us borrow her umbrella digging contraption and it worked perfectly.

With the shade up we huddle under as we got pretty burnt in Panama and didn’t want to make things any worse.

After a lot of relaxing, swimming and napping, we find a little hole in the wall food spot and get us a chicken burger and a hot dog, we chow down whilst watching a young couple struggle to hold 4 ice creams that they had just bought while holding onto a very young golden retriever puppy, and struggle they did as 2 scoops of vanilla went tumbling to the ground.

After a shower we change into our hiking shoes and take to the state park walking trails, fully shaded the whole way it was a nice, cool and peaceful walk that got our legs moving up and down the narrow tracks careful not to veer off as spiders seemed to have set up shop in every nook and cranny.

Refreshed we drive into the centre of St Augustine and find a very rich history laden town with a main street of quaint old world shops and restaurants.

We order up 2 smoothies and struggle with the waitress as both smoothies had bananas in them, next time we will just put on the American accent for banana and save a lot of confusion.

With a ghost tour booked for late that night we check out a very old fortress castle, while it was closed we walk along the perimeter where a moat would have been back in the day. The castle looked to be built with a mixture of cement and seashells and was huge, it even had its own drawbridge.

Struggling to find somewhere for dinner that wasn’t a grill serving burgers and fried chicken we settle for a nice thin crust pizza while watching the world go by from a window booth and it wasn’t long before we are on our way back up the road to the meeting point for the ghostly tour.

Pitch black our tour starts, we board a very well decorated trolley car and get driven all around the island to well documented haunted sites.

First stop was a park where people have seen swings moving and then come to a compete and abrupt stop.

We see the old lighthouse where people have seen a man several times looking out from the top. Next was the old jail where hundreds of inmates had died in overly cramped quarters, some had even been strung up and hung of the gallows.

While there we’re very spooky trees and settings, no ghosts were spotted yet..

A little short and sweet and no ghost sightings as yet, but we will keep hunting in towns and cities to come.

Off back to the campgrounds for bed, all be it not the best idea to be spooked out right before heading into a dark and lonesome state park, but we were brave and persevered even if we did huddle together to brush our teeth in the dim lights of the restrooms.

Where We Stayed in St Augustine