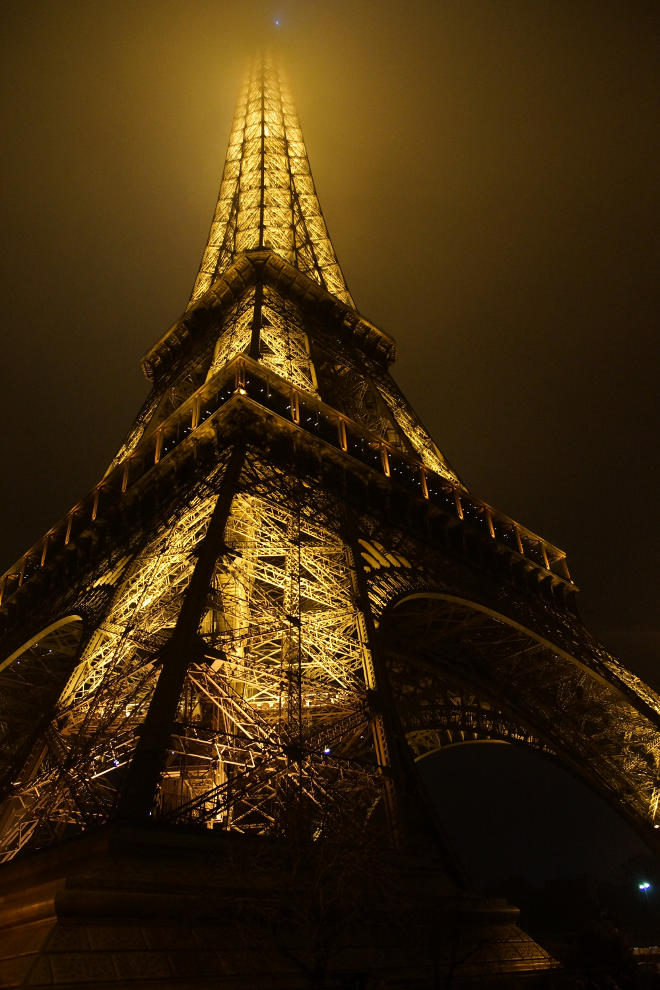 New Years Eve is finally upon us and a big breakfast to start the day is in order. We jump up and head down to the buffet area.

Not quite as lavish as the Double Tree in Amsterdam, but still it was a nice spread, even if we had to fight for the fact that we have breakfast included on 3 separate occasions.

We whip up to our room and book in a Hop On Hop Off Bus Tour of Paris, it being too bloody cold to explore on foot, a bus seemed the next best thing.

After a little drama trying to get our tickets printed at reception, we head out to the Louvre to our pick up spot to get our tour on the road.

We travel around (on the top deck) listening to a running commentary of the sights. We pass by museums, the Arc De Triomphe, The Norte Dame, huge universities and monuments.

The top deck may not have been a smart idea as we were now freezing to the point of not being able to feel our legs. So we were happy to have finished the circuit and as luck would have it, we get off the bus and step right into a Lindt Cafe.

With two hot chocolates in hand, we hopefully start to warm up… Not so successful, the hour trip in -3 Degrees was going to take more than just a hot chocolate to overcome.

We step back outside and almost immediately start to freeze again, so we head into nearly every shop on the block to try and get warm, even a cleaning shop!

Just about to give up on ever being warm again, we stumble into a corner cafe and order up some French onion soup, some fries and some hot drinks and bunker down.

Feeling a little better, we decided to take the second leg of our bus tour which takes us through the older neighbourhoods of Paris. With all the bottom seats of the bus taken, we head back up to the open top deck once again, this time huddling right up the back together in hopes to stay warm.

We pass by the Gare Du Nord station where we arrived from the Netherlands only days before. Turns out it is one of the busiest stations in all of Europe.

We pass by the Moulin Rouge as well as the huge chapel on the hill that we went to on our first morning in Paris and saw the glorious sun rise.

At the end of our tour now we decide to jump back on the first bus and head to the Champs Elysee where we saw a phone shop so we can sort out some Wifi for our road trip that we have coming up. Some slight communication problems later, we end up with a portable wifi hub, that’ll do!

Then we head into H&M to get Adam some warm clothes to wear. Since now he has been getting around only in jumpers. So we find a nice warm woolly jumper to wear underneath, a big woolly scarf and some gloves. Now he’s set!

Still a few hours left until midnight we decide to go to a movie to kill some time. We book in for 7:25pm to see Passengers and then head our to 5 Guys for a quick veggie burger and fries while we wait for the movie.

The cinema where we watched Passengers

Five Guys was a mad house

The cinema was pretty good, probably on of the better ones we have been to outside of Ballarat. We grab some popcorn and settle in, niiiice and waaaarm.

Movie ended we decide to make tracks for the Eiffel Tower. While it isn’t the main attraction for New Years, we really wanted to be sitting near it when the clock strikes midnight.

An hour to go we find a good spot and settle in. The big water feature that we were sitting near had just about froze over, the night was so bitterly cold.

Midnight come and unfortunately there was no countdown which was a bit sad, but we had our own and then watched on as the Eiffel Tower lit up and sparkled to bring in the new year.

It was a very brisk 30 minute walk back to the hotel, our legs were like icicles by the time we got back, not even a 15 minute shower on nearly the hottest temperature could warm them back up.

All we could do was snuggle up and drift off to sleep. Cold, but happy to be in Pairs to start 2017.