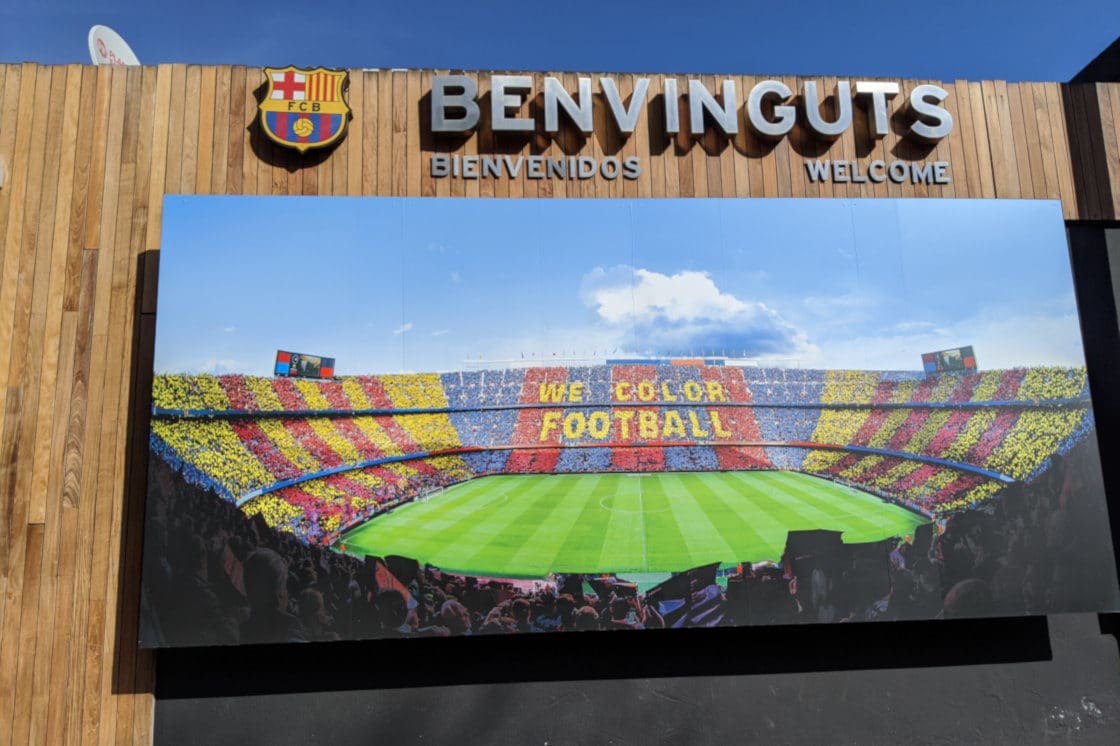 After breakfast and a long lie in, we decided that today was the day to see Barcelona’s soccer stadium Camp Nou. And once again we decided to walk there, a mere hour a half walk away.

Before heading out we go back to our new favourite lunch spot, The Funky Baker, where we get our Aussie salad roll and a coffee. Roll in hand, we eat whilst navigating our way to the stadium.

A silly idea to eat and navigate at the same time as we forgot to turn onto the main road and ended up way off track. But as luck would have it, we were only two blocks away from a magic fountain! I mean.. it was a fountain that was also magic, we had to see this!

As we walked over, we saw that the fountain was empty with a big fence around it… It was down for maintenance. Winter strikes again!

All was not lost though as when we turned around the fountain was only a small blip when compared to the HUGE palace that stood high on the hill above us with long wide stairs leading all the way to the top. It was grand!

As our tour was booked for 2pm we couldn’t dilly dally around, so getting back on track we continued the walk to the stadium.

The Camp Nou had a lot to live up to after the great tour of the Bernabeu from last week. From the outside, this stadium looked massive!

We started the tour by going through the Barcelona FC museum, which was basically a room full of their trophies. Highlights included seeing their 5 Champions League trophies, Leo Messi’s 6 Balon d’Or trophies, plus all 26 of their La Liga titles.

Next up was a self guided tour of their stadium. It was similar to the Bernabeu, we got to see the stadium from a nice vantage point and then go down through the rooms.

The rooms weren’t as impressive as Real Madrid’s, but I have a feeling they were the away rooms.

We then went up the players race next door. Strangely enough, there was a little prayer room so players could pray to God, Allah, Harry Potter, or whatever fictional character they believe in. Pretty sickening really.

We went up the race and sat on the players benches. The stadium looked incredible from down on the field and you could only imagine how electric the atmosphere would be on game day.

Next up was a walk through the press room, commentary room and the VIP boxes. While the stadium was impressive, it felt kind of run down and like we were stepping back into the 1970s. But that may also be part of it’s charm.

The tour ended with the usual cash grabs in the club shop and ‘electronic photos with a player’ things you could buy. All in all it was a great tour and was amazing to see one of the worlds greatest stadiums in person.

Time to make tracks for home, our poor legs, knees and butts all singing out for a rest we find our old unfriendly restaurant TAPA TAPA (the tapas restaurant for tourists pretty much) and order a salad and some patatas bravas. Yes I KNOW we eat too many potatoes.

Still about 40 minutes of walking to go, we hold strong as we pass subway stations and finally arrive home. All in all, we would have walked about 15+ kilometres for the day. Google fitness said we did 36,000 steps!

It wasn’t until about 9pm that we surfaced again for some food. Thinking that our roommates had vacated the apartment this morning, we were strutting around like we owned the place, being loud, our netflix volume up high, but then aaaaaaawkward – as we opened our bedroom door, they were in the loungeroom talking quietly to each other.

Eeeeeek! So we quickly duck out without saying anything (not that they’d be able to understand us anyway)

This time we found ourselves an amazing little vegetarian place and ordered up some zucchini soup and some vegetable paella. (with no potatoes)

Our last full day tomorrow, we get head back to our apartment to get some well deserved sleep.