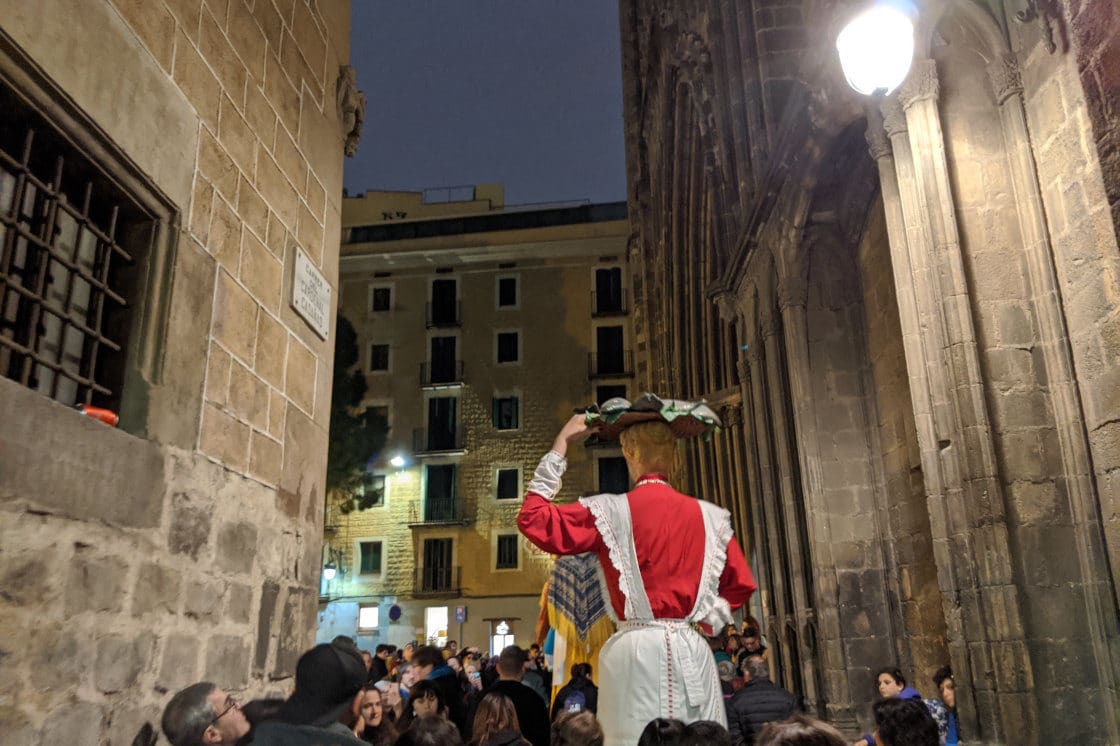 On the agenda today was a Gaudi tour of Barcelona hosted be Linnie once again. Maybe she should consider a job in tourism! Gaudi was a renowned architect back in the day and was known for his quirky designs, and he certainly didn’t disappoint!

But before the tour begins, we made our way to the Ramblas to catch a glimpse of the parade of the giants, which as it turns out, we missed by about 2 minutes. That’s what happens when you sleep in. So we decide to catch the later parade.

Whilst on the busy street we duck into a Beethoven shop that had folders and folders of sheet music piled high to the roof. We then fueled Adam up with some Starbucks and got a VERY expensive bag of dried apples from the market.

Our first Gaudi house stop was the Palau de la Música Catalana, which I think was a concert hall of sorts.

The outside was grand and the inside even grander. He uses materials in his builds that I have never seen before and the colour pallet was also unique. Quite remarkable.

Next stop was the Casa Batlló. Think of this building like a normal 5 story terrace but on a lot of crack.

The terraces looked like shark bones, the facade was painted in whites and pastels and the overall shape was all curvy and psychedelic. The art students nearby trying to sketch it were having a field day.

Casa Milà was our 3rd stop. This building looked like a giant white beehive. It was a little unimpressive so devoid of colour when compared with the others we had seen. But it still stood out like a sore thumb amongst the other traditional buildings.

And then we come to La Sagrada Familia. a HUGE basilica that dominates the space with tall spiked pillars and even taller cranes that were still working on finishing the building – which is odd considering they started building it back in 1882.

We considered going inside, but at $70 and a huge line of noisy tourists, we were quickly dissuaded. So we did a lap around the truely strange gothic/Disney villain castle/Lord of the Rings looking tower and started the trek up to Guell Park.

I call it a trek as it was mainly uphill, a hard slog on our already tired legs for about half an hour on pavement. We were quite looking forward to seeing some nature, even a blade of grass would have been exciting as we had seen little to none since arriving in Spain. These guys love their concrete tiles.

We opted to tour around the free part of the park as our lovely tour guide Mariana suggested and avoided yet another expensive tourist trap. Seriously, they charge for anything and everything here.

Meandering through the park we find little pockets of Gaudi designed architecture. Random rock terraces just built into the side of the cliff, colourful tiled seats and the two little houses that everyone come to see. Unfortunately being winter, they were doing some work on the main parts so our view was a little distorted, but it was an impressive sight none the less.

We clamber back down to ground level and back onto the street and make our way to our last stop of the day, the Casa Vicens.

Tucked away down a side street was Gaudi’s first ever build in Barcelona. It was a smallish (in comparison to his other huge works) rectangle house that looked to have a colourful Japanese temple vibe to it. We stood in awe at how someone could think up such a structure, he was certainly a creative genius.

Our tour all done, we start walking back. However, Linnie needed to pee quite badly, so she ducked into a restaurant to borrow their toilet and upon coming out, smelled the sweet smell of chips and burgers. Having been on a long ass walk for the last 3 hours, it was definitely time to refuel.

So we ended up ordering up two veggie burgers and half a kilo of chips. Yes… they offered half a kilo bowls of chips, how could we say no to this?

After inhaling the food it was finally time to go back to the room and pass out. Unfortunately for Linnie, the half a kilo of chips did not go down well and she spent the next few hours being stabbed in the stomach. Glutton for punishment.

After a long nap and a rest, it was nearly time for the parade of the giants. This time we were not missing it. So we hurry over to the Ramblas and catch the parade just after it started. The giants were all lined up, dancing and twirling in their flowy dresses and having a ball. We followed them all the way to the end dancing along to the flutes and drums. It was really really fun to watch.

Still feeling full from hamburgers and a shitload of potatoes, we find a little bakery and grab our new go-to meal of a crusty baguette and wander around the old streets until we were tuckered out.

Heading back, we realised we didn’t have enough oats for breakfast so we hit up a few supermarkets but had no luck, no one had our oats! We were so close to bedtime!!! Googling bigger supermarkets we find our old favourite Dia where we finally find what we were looking for.

Completely pooped, we head straight for bed to rest up for another day of adventuring tomorrow.