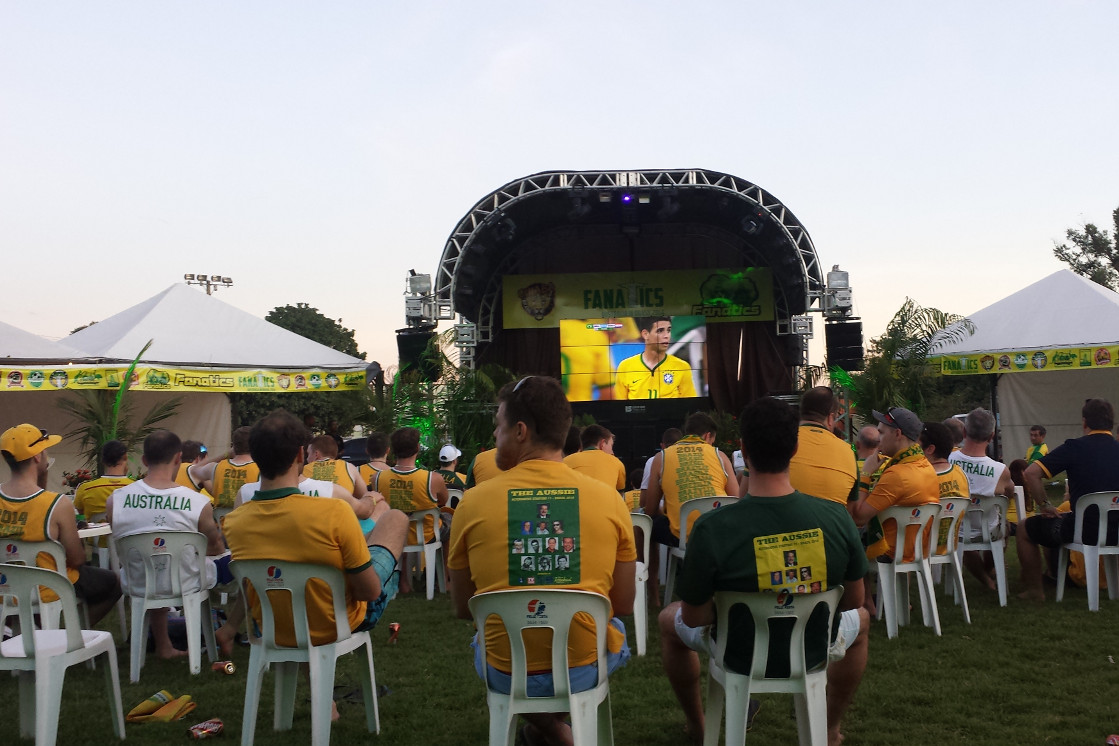 When my baby smiles at me I go to……

We kicked off our last day in Buenos Aires by taking in a tour of La Bombonera, or “The Chocolate Box” as it is also known as. It is the home ground of the Boca Juniors, the most popular team in Argentina.

This stadium is epic! It is renowned as one of the fiercest stadiums in the world and they have fences up to stop fans throwing stuff at players. Away fans aren’t allowed in and only season ticket holders are allowed tickets, and that is over a

Away fans aren’t allowed in and only season ticket holders are allowed tickets, and that is over a 16 year wait.

It was a really good experience the venue and do the tour, because it is one of the most famous stadiums in the world.

Off we go to Rio, upgraded yet again to business class this time, we have no idea why we keep getting upgraded but hey, we’re not complaining.

We hit up the business lounge before the flight and literally eat everything they had on offer, it was a pretty good spread.

Getting on the plane and we were sitting the front row! This has never happened before, served first, off the plane first, we felt a bit special.

We hadn’t picked up our World Cup tickets yet and we knew that the Rio airport has an outlet but it shuts at 9pm and we arrived at 8:10pm.. Plenty of time….

So we cruise through the usual suspects, customs were a breeze and the baggage scanners were quick so you’d think that by 8:30 we would have time to grab our bags off the carousel and run…

But no, our bags were pretty much the last ones off the plane. By the time we got them it was 9pm.

Refusing to give up as it would mean we would have to line up for hours on end for them the next day, we walked/jogged to the FIFA counter, which turned out to be a long ass hike!

We turned up the the counter and they were serving the last person and announced that they were closed! Not on my watch!

I was red, sweaty, and obviously looked razzled as we pleaded our case to the FIFA official, “come back at 9am” she says.

So we explained we would be on a plane again at 7:40am and that combined with some looks of desperation, wiping the sweat from my brow and some very well placed puppy dog eyes and Bingo! She says we can be the absolute last ones, thank god!

Tickets in hand, we share a cab to the hotel with another Aussie and just like that we hit Copacabana Beach and soak whatever atmosphere there is at 11pm.

Even at this time all the bars were still open and a market running up and down the beach was in full swing, this city is going to be awesome.

Up at 4am and we meet up with all the Fanatics who we’re doing our tour with, we jump on a bus and head back to the airport for our very own chartered flight, no strikes are going to cancel our flight!

Once we arrive in our first Brazil stop Cuiaba, we check into the hotel and head to the opening party, it was awesome!

The Fanatics had hired an old military barracks and had it set up with bars, tv screens, bbqs and chairs galore, this was going to be a great night, and that it was.

There were big screens setup for the Brazil vs Croatia match and it was a bit sombre when Brazil went down a goal early on.

But it was all Brazil after that as they won 3-1.

We are going to have to get used to Portuguese commentators for this trip as nothing is in English but gee do they get excited after a goal. Every Brazil goal was greeted wiith the commentator screaming GGGGOOOOOOAAAAAALLLL.

It was a pretty good buzz during the game, before the match and after every Brazil goal there were fireworks going off all over the city.

All the shopping malls were shut down for 3hrs while the match was on and the city was pretty much a ghost town as everyone was trying to find a tv screen.

The rest of the night was a cracker too. They hired circus entertainers and some deejays called The Stamford Brothers. Apparently they are pretty popular, but not really our style of music.

We ended up having plenty of drinks after we managed to find a heap of free beer/vodka tokens lying around.

There are so many nice people on the tour with us and we’ve already made a few friends. A few of us went back to watch the NBA Final which now sees San Antonio one win away from the title against Miami.

It was then off to bed to get ready for a big day tomorrow. The Australia match is on tomorrow evening and there is another big day of festivities planned at the live site.