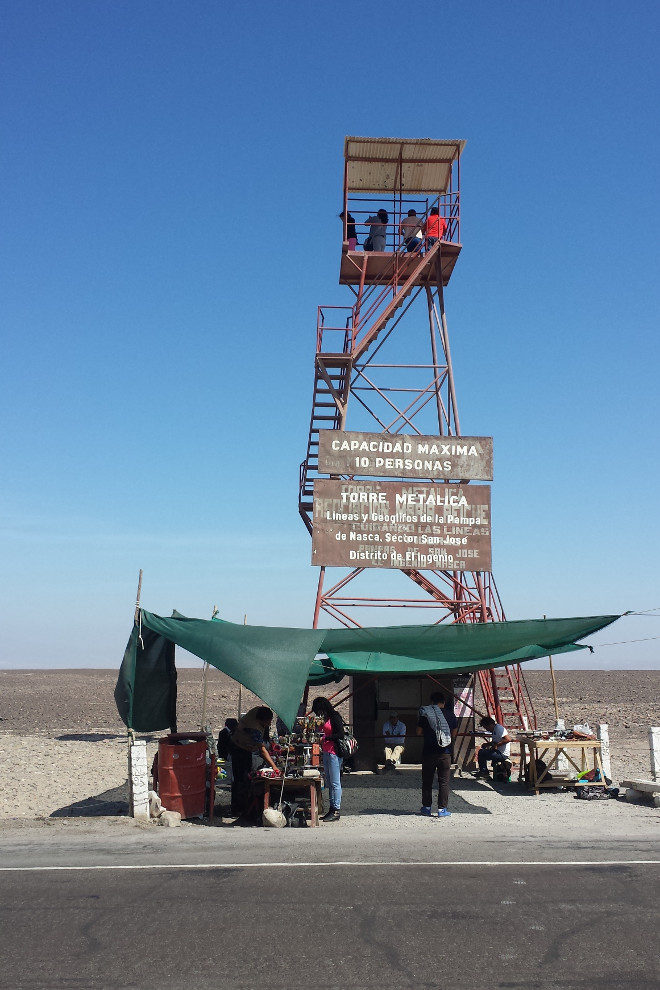 Even though we could have stayed at the beautiful hotel in Ica we had to move on. We had a feast of a breakfast with our Canadian friends before we packed the car up and were on our way to Nazca.

A few roundabouts and absolutely crowded roads later we were back on the Americana highway flying solo with the occasional slow truck that we had to pass, especially going up the windy hilly roads, and down them for that matter.

All along the roads there were heaps and heaps of monuments, crosses and flowers, so many people died on these roads that it’s a wonder how we haven’t seen more accidents.

The highway used to be a dirt track that only the bravest of drivers would go on so we were assuming that that’s where most of the deaths originated from.

Cruising along we went past a few small towns, every house it seems is unfinished with rebar still protruding from the roof. This, apparently, is so they pay less tax on their ‘unfinished’ house.

You’d think the government would have cottoned on to this loop hole, but no, the towns one after the other still look like they’re all under construction.

Heading into Nazca we stopped at a tower so we could check out the Nazca Lines that are believed to be made by aliens, believed by us anyway.

They are said to be around 1600 years old which is pretty impressive.

We only got to see two of the ‘drawings’ in the sand, unless you went up in a small plane.

But Adam wasn’t too keen on the flying idea, the planes did look very small and they seem to be flying all over the place.

If the Peruvians fly like they drive I was happy to be on land for this one.

We arrived at our hotel safe and sound, apart from one truck nearly taking us out (but that’s ok, he gave us a wave) and us trying to do a u-turn in the middle of the freeway and the damn gear wouldn’t go in reverse so I could do a quick 3 point turn and of course a truck is heading toward us!

We parked the car in the hotel garage and settled in for the day.

With a 9 hour drive tomorrow we decided to take it fairly easy, so we pulled up a sun lounger and had a nap and watched a few eps on the iPad.

Over the fence we could hear what sounded like a festival so we ventured out to investigate, turned out to be a music festival inside a restaurant that was full of Peruvians so we thought we’d better leave them to it.

We had some lunch and then parked ourselves back in the hotel for the rest of the day. We made an awesome pillow bed with the multitude of pillows that they supplied us with and did some research on our upcoming Brazil leg of the holiday.

A big dinner of Peru’s finest cuisine and then it was off to bed to catch up on some Zzz’s as it’s up at 6am tomorrow morning ahead of our big 9 hour drive through the hills to Cusco and then we hit the tracks on the Inca Trail on Tuesday!

Where We Stayed in Nazca