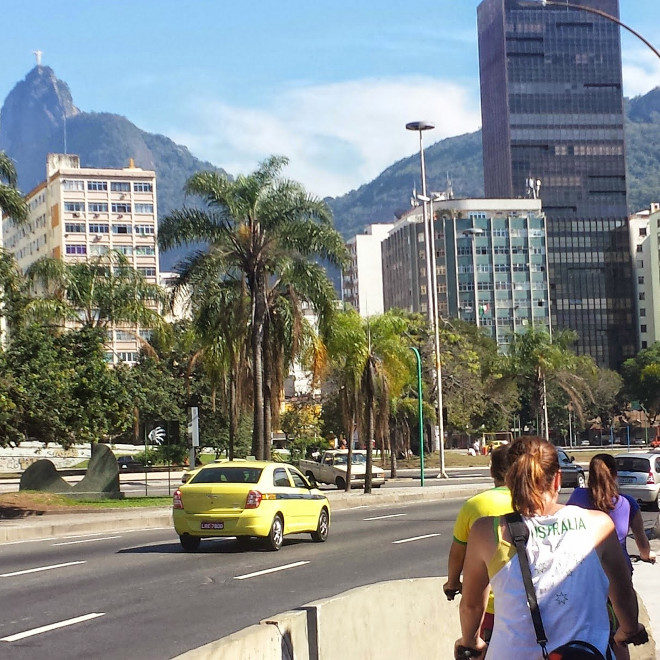 Today was our first full day in Rio and it felt good not having to follow around a group of Aussies and do our own thing again.

First on the cards was a bike ride around Rio, our guide Philip was a nice Dutchie who took us to all the main sights starting with the Copacabana Beach.

Then onto the Sugar Loaf Mountian area and then through some back streets where we stopped at a bar, or a dirty foot as they call them, for some drinks and snacks.

We then cruised to the famous Lagoon which is an impressive fresh/salt water lake that will hold the rowing events for the next Olympics, we could also see the Christ the Redeemer statue which overlooks this huge Lake.

Then we made the round trip to Ipanema Beach which lead us back to Copacabana, a quick 3 and a 1/2 hours and 24kms of information overload.

By this time it was getting pretty warm, about 30 degrees, so we changed into our swimmers and hit the beach.

The water was beautiful but at the same time it was so rough and strong, after getting wiped out a few times by some huge waves we decided it was best to just chill on the sand and lay in the sun.

Next stop was the very much anticipated trip to the Maracanà Stadium for our last taste of World Cup action to see France Vs Ecuador, the most famous football ground in the world. It was famous for holding 199,856 people for the 1950 World Cup Final.

After a trip on the subway which dragged on for about an hour we arrived a tad late, but we managed to get there just in time for the national anthems and the players walking out.

This stadium was nothing short of incredible and certainly lived up to expectations.

The game ended 0-0 which was our first goalless match of the trip. However despite the lack of goals, it was a very entertaining match with plenty of attempts on the Ecuador goal with their superstar keeper making some miraculous saves.

One thing that stood out was the amount of police and military outside the ground. We passed through at least 200+ authorities just near the gate, all wielding weapons and full body armour a far cry from what we are used to back home.

With the match now finished we had a 30 minute walk back to the subway, another hour on the train and then arrived back to Copacabana pretty tired. The subway was heaving and you could barely move on the train, so it was a bit of a nightmare.

We decided to hit the sack as we had another early start tomorrow for a full day tour of Rio. All in all, another awesome day.