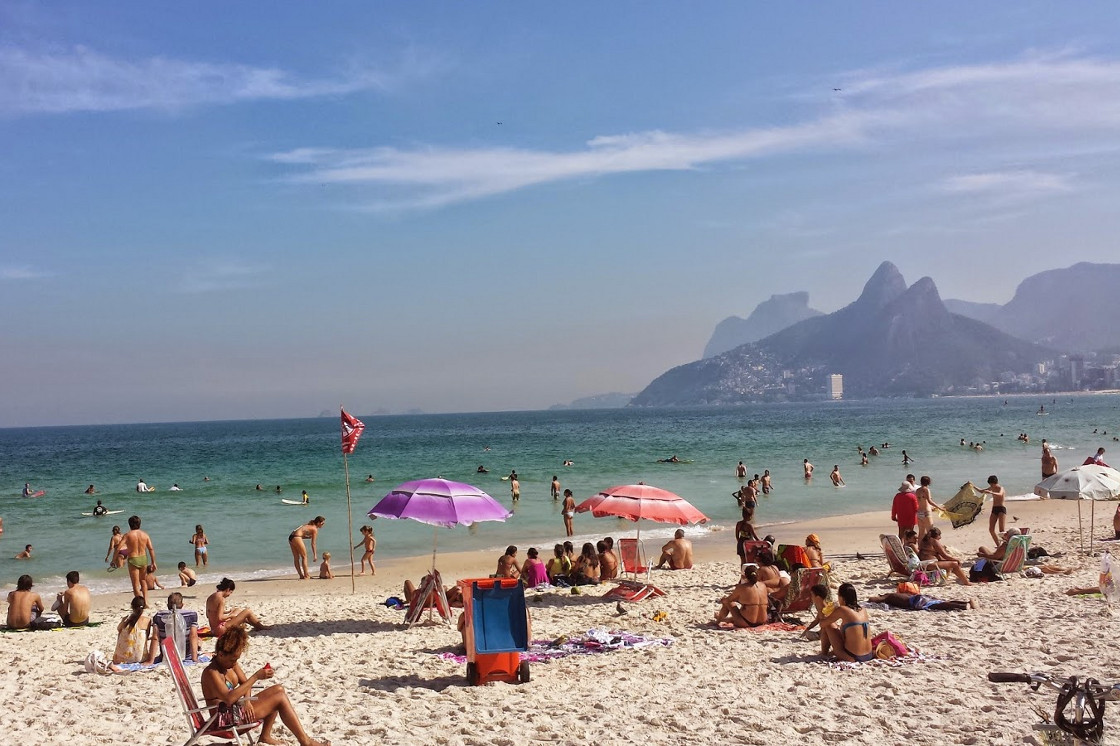 Copacabana lives up to its name

Today we decided to splurge on breakfast and head to one of the nicer hotels along the beach called the Othon.

With only a small amount of Brazilian money left we needed to save as much as possible for the taxi ride to the airport later on in the day, so we ate until we couldnt eat anymore with all great intentions of not eating until we got to the airport.

We slipped into our swimmers and took the back entrance of the apartment complex and swung back around to the beach, for some reason the door man won’t let us out the front when we are dressed in towels and bathers…

Straight away we were offered some loungers to lay on and an umbrella to keep the sun off our faces, then he asked us if we needed any food or drinks to just call him over, he would even go and get us McDonalds if we wanted it, talk about amazing service!

The beach was to die for, the sand as soft as pillows and the water was warm and inviting, until you got in too deep and it chucked out back out again.But Adam had the time of his life catching wave after wave, body surfing back onto the sand at great speeds, there really is no beach like it.

But Adam had the time of his life catching wave after wave, body surfing back onto the sand at great speeds, there really is no beach like it.

We sat like this until about 2:30pm when we hesitantly had to leave so we could get to the airport in time, we could have stayed there all day. We called for our bill which we were 7 Real short for so the guy sent his little boy with us to collect the shortfall. a very trusting father considering he would have to get back through a 6

A very trusting father considering he would have to get back through a very busy six lane road.

All packed up we left our little apartment, wheeled our luggage up the road and cheekily used the Othons concierge to book us a taxi, this worked out well as I didn’t fancy standing on the side of the road hailing taxis like muppets.

Considering the roads were insanely busy the driver must have decided to take us on the back roads because, we didn’t remember seeing any of the old, graffitied and poverish scenery.We even drove past a favela which is the

We even drove past a favela which is the equivilent to a massive housing estate but for the very poor.

It took about an hour to get to the airport which was all in vein considering our flight had been moved from 7:10pm to 9:00pm…

Not too happy as we could have spent a few more hours lounging on the beach. So we set up camp at the airport and watched some tv whilst charging our devices.

Finally, we boarded the plane which ended up taking off at about 9:45pm, this was Brazil’s final up yours to the public transport system, everything we have been on has been slow, delayed or terrible. I hope they sort their shit out before the Olympic Games!

If I could sum up Brazil in a sentence it would be, an amazing country that oozes potential, but is unfortunately run by idiots.

A few zzz’s later we find ourselves back in Santiago where it all started.

With the time difference, we got to our hotel at about 2am. Happy to return to a Spanish speaking country, we were back to conversing with the staff and knowing what’s going on.

Our room was a very welcome sight, and even though we couldn’t see much out the window of the taxi, Santiago looks to be a nice, clean, organised and friendly city that we can’t wait to explore!