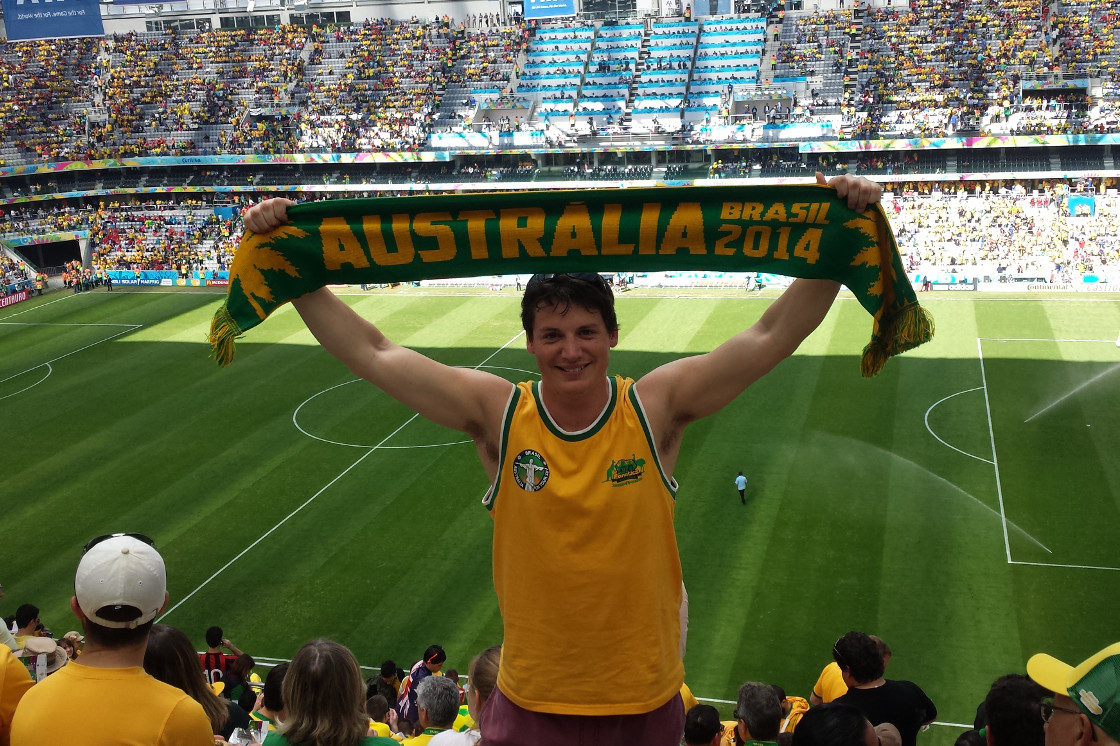 The big day had finally arrived and we were pretty excited. It was the last match for Australia, but given we were playing against Spain it, meant we got to see some of the greatest players in the world as they had won the previous World Cup and the past two European Cups.

We kicked the day off with a buffet breakfast, then we all met up as a group and walked to this huge castle setting in the middle of the city which included free food and drinks, plus guest speakers.

This castle was huge, we’re not sure the history of it but it was pretty lavish. We enjoyed a few beers and mini hamburgers, listened to some of the guest speakers and caught up with a heap of friends we had made on the trip so far.

It was the last time we’d see most of these people as we were leaving the tour in the morning for Rio, while they kick on to Sao Paulo. We had met some good people and had good times and made memories for life.

There were about 2000 people at this place, but the best bit was yet to come. We all walked as a group for 2km to the stadium, everyone chanting and making noise. The locals absolutely loved it as they looked out on their balconies, or beeped their car horns or gave us high fives as we walked past.

The match was played Arena da Baixada, it was the stadium that they had barely finished building in the lead up to the Cup. We weren’t expecting big things, but it was absolutely fantastic.

Inside the stadium the atmosphere was electric. Australia easily outnumbered the Spanish with yellow everywhere, and it was loud, real loud.

Australia started well and held their own in defence, but that was about as good as it got. A-League bound David Villa broke the deadlock in the 36′ minute with a nice back heel as Spain went into the break with a 1-0 lead.

It was much of the same in the second half as Fernando Torres and Juan Mata scored in the 69′ and 82′ minute to round out a convincing 3-0 victory.

But it was good to know that every goal scored by one of their stars would have been more of a dagger for them than us, given they were already eliminated.

Despite the loss, everyone was still in pretty good spirits about a pretty good World Cup campaign. We lost all three games, but we proved we have a pretty good future with some exciting players coming through.

After the match we had an hour or so to find somewhere to watch the final Brazil group match, they were playing Cameroon.

We managed to find a group of about twenty Aussies and found a pretty cool Sports Bar / Nightclub called the Santa Marta. It was jam packed full of 800+ mad football fans, so we really got to experience what a Brazil match was like.

Brazil had taken a 2-1 lead by half time and by that stage we were almost deaf. These guys like to cheer, and I mean seriously cheer. They were jumping around, dancing and absolutely loving it.

At about 70′ we decided to leave and check out some festivities at another place to experience somewhere else before it ended. One of the main busy streets was literally a ghost town, not a single car in site bar a couple here and there.

Not long later we heard fireworks going off (or maybe gun shots, who knows!) plus cheers around the city and car horns beeping.

So we could only assume Brazil had scored another goal. When the match ended people were everywhere cheering on the streets. They had won 4-1 and topped the group.

We grabbed a few more drinks, then headed out for some desert and then headed back to the hotel. It was another awesome day and one we’ll never forget.

Where We Stayed in Curitiba