A very relaxing sleep on our top level room we awake and with all our clothes being washed and neatly repacked the day before we were ready to go.

We head down to breakfast and fill up and then it’s back in the car, we had 2 states to visit today.

First up we arrive in Providence, Rhode Island. A very European feel to this little city we park our car and go for a stroll down the Main Street.

It was close to 11:30am by now so we thought we may as well grab some lunch if we found anything nice. And boy did we!

A very cute little Paris themed bakery which had the nicest food we had seen in a while, we had a pork shoulder panini and a quiche, and Adam found a real coffee, delicious!

Exploring around with full satisfied tummies we find the State Capitol Building, most Capitol buildings that we have seen seem to all stand out with a huge central pillar covered in gold and usually feature a statue of someone prominent, this one was no exception, you could spot it a mile away.

We keep going and find a nice river walk running through the centre of town, we pass through here and see a building full of office workers out on the street with the fire alarm buzzing away, fire trucks everywhere but no smoke or panic in sight, false alarm it would seem.

Back to the car now we head for our final destination, Salem Massachusetts, home of the witch trials back in 1792.

For some reason the traffic into the little town of Salem was nearly as bad as Washington, arriving nearly an hour and a half later than expected we pull into our campgrounds for the night, Adam has reserved the best camping spot and we were all set up in no time.

Driving back into the city center we park the car. To say that Salem were really milking the whole witch phenomenon was an understatement, about 80% of everything here had something to do with witches, shops, their city logo, tours and museums, it was bizzare.

We decided to go to a museum to get the witch history down pat before our tour of the town later that night. We head inside the museum and wait for the tour to start, 10 minutes later our tour guide come out who could be roughly described as a Miley Cirus lookalike wearing a pilgrim outfit, and she was a nutter.

The tour took us into the basement where they had lifelike scenes depicting what it was like back in the day, all the while Miley was giving us a rundown of each scene. The whole experience was HORRIBLE! 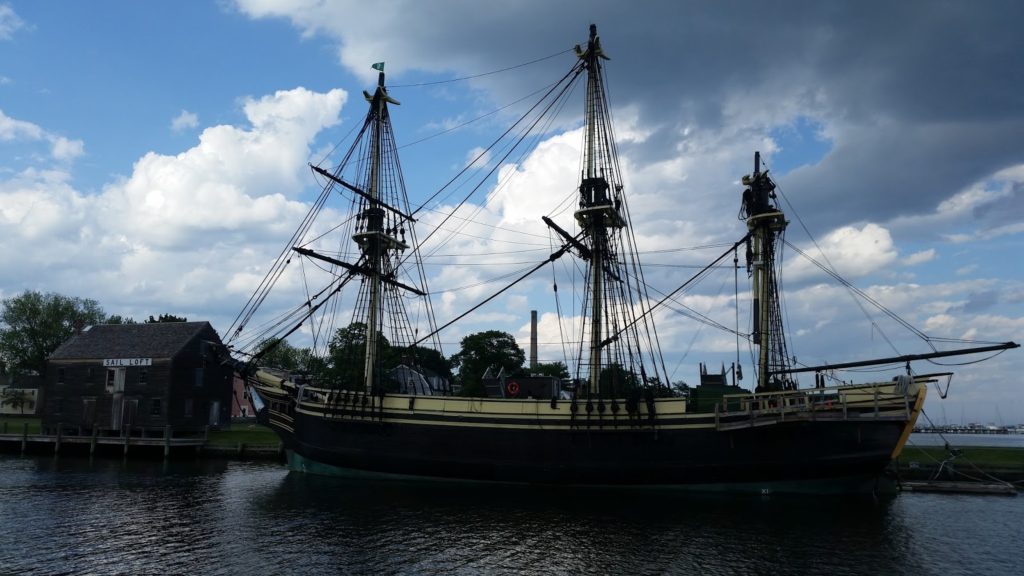 The museum was a joke and the tour guide was disinterested and weird.. The tour was over in 20 minutes, we learnt nothing and then she got out her tip jar, pathetic.

Deciding not to do anymore museums for fear of them being even more tacky than the last we wander around the town and check out the harbour area. We stop for a little snack of sweet potato fries and relax there taking in the ocean views.

We wander back and go into a few witch supply shops, a lot of weird and stuff in there! It was only an hour until our tour so we jump back in the car and have a little siesta until it was time to meet up at our witch tour which as it turned out was more about modern day witches and spells than a historic tour of Salem, a bit of a surprise.

After a quick spell where we chanted to the Gods to bless our circle and keep us safe we hit the pavement and are guided all around Salem, to the graveyard, the back alleyways and through the empty shopping district, all the while getting a lesson in magic and all that it holds from a 5th generation witch herself.

Our group also had 3 more witches in it, we figured witches were much like vampires and werewolves. It was a pretty fun experience, even if we found what they were saying a bit beyond the realms of reality.

After our walk we find a restaurant still serving dinner and both tuck into a vegetarian risotto, I think we may be craving vegetables… It went down a treat!

Back to the tent and for the first time in a long time it was chilly, so Linnie throws on a few extra pairs of socks, a jumper and a sleeping bag while Adam lays out half naked enjoying not sweating himself to sleep.

Where We Stayed in Salem