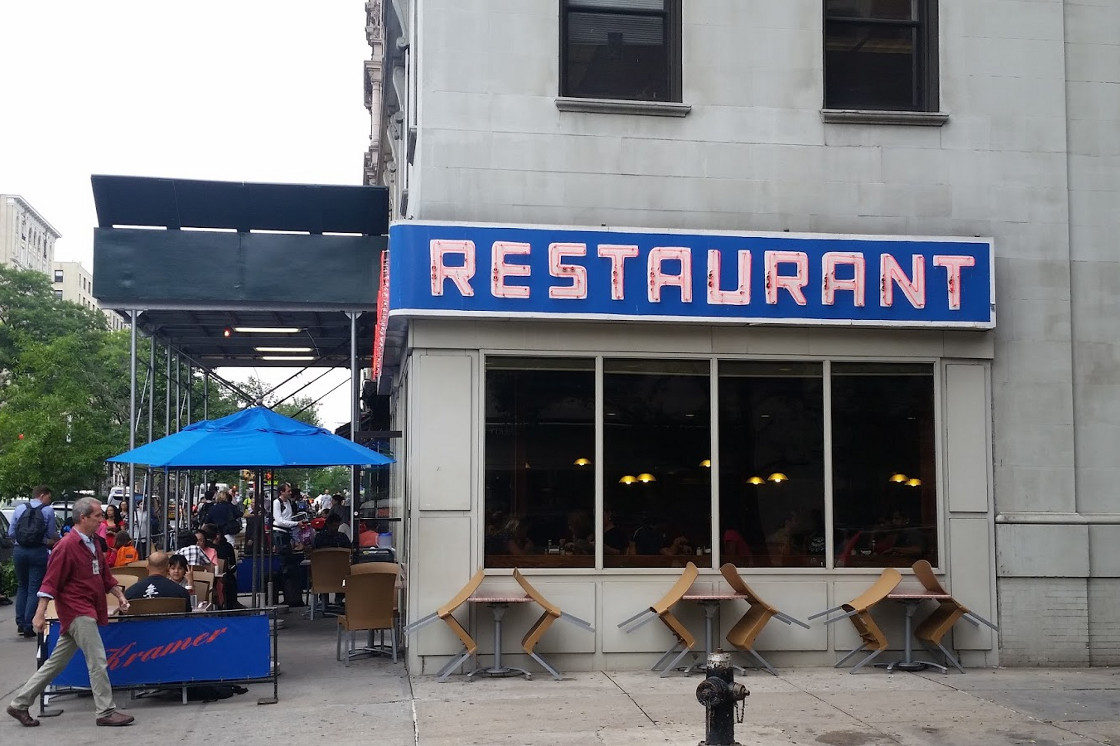 After a nice little sleep in, we set off for a day exploring New York City. We had heard about a highly rated Broadway show written by Larry David and Starring Jason Alexander, so our first point of call was to suss out tickets for that.

We looked online and tickets were well over $150 each for even the average seats up the top, so instead we thought we’d try the box office itself and see if there was anything cheaper. So before heading over we grab some lunch at a veeeeeerrrryyyy slow restaurant.

We ended up getting the $35ea tickets and just our luck it turned out they were up in the box seats up on the side. Not sure how we managed to get hold of that, but we were pretty chuffed.

On a much more somber note, while eating breakfast we see breaking news on the tv saying that some nutter went into a church in Charleston, South Carolina and unloaded with a gun killing a heap of black people in what were racial killings. It turned out we were just one block from where that happened only a fortnight ago, so it was really sad to hear.

It wasn’t a nice thing to hear about, but we continued on our day and next up we decided to rent some bikes for 3hrs and go for a ride around Central Park.

We could have spent hours riding around given it was so big and it was a nice warm day too, despite it being overcast.

We saw plenty, pretty much doing a couple of loops around the park. We even stopped by Tom’s Restaurant which is the real life name of the synonymous Seinfeld Diner. It was not the first time we had seen it, but it is always great to go back and check it out.

One of the highlights of Central Park were the Bethesda Terrace and Fountain, walking up The Mall area and also having a traditional hot dog with ketchup and mustard. It was a great afternoon.

On the way back we stopped for a coffee at Trump Towers which we saw many times on telly when watching The Apprentice all those years ago.

We even stopped by the Rockefeller Center which is a pretty famous tower. You can do the Top Of The Rock tour which gives you 360 degree views of the city, but given it was an overcast day we decided to leave it for Saturday instead.

It was getting on a bit now and with the show not too far away, we stopped for a little rest at the hotel and got changed. We stopped by M&M World again to stock up on chocolate and then headed to the show.

We were so glad we decided to go as the show was epic. Given it was written by Larry David, it was basically the same as a Seinfeld or Curb Your Enthusiasm but on the stage instead. It was the same type of humour.

Larry David actually starred in it up until June 7th when the run ended, but given it was so popular they extended the run for another 6 weeks with Jason Alexander (better known as George from Seinfeld) taking over the lead role.

Our seats were pretty epic too. We had a little box to ourselves that was relatively close to the stage. How we managed to secure that for $35 each on the day of the show we will never know.

Full from M&Ms, we decided to get a slice of pizza for tea from around then corner and then thought we’d head back to the theater just in case the actors came out and we could get a few photos. This was an inspired decision!

After waiting about 10 mins Jason Alexander came out and said he was happy to take selfies with everyone and sign autographs.

When he got up to us we told him we came from Australia to see him in the show and he was pretty chuffed. We told him he was a champion and he told us a story of how the first time he was ever called a champion was when he was in Melbourne a few years ago.

Given he wasn’t doing much small talk with anyone else, we felt pretty good about it. He took our phone and took a selfie photo of us and then we headed off for a little walk around the city.

It was one of the highlights of the trip and we were so glad we decided to go to the show. It’ll be pretty hard to top tonight, but the tour of the Statue Of Liberty tomorrow and a Yankees game may come close.

Where We Stayed in New York