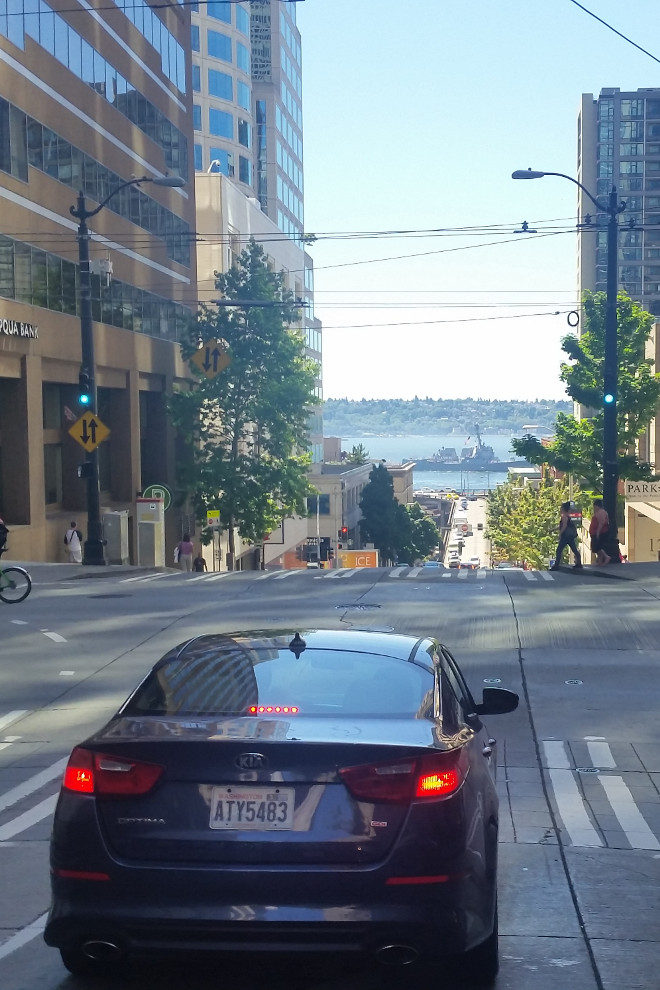 With the light streaming in waking us up early as usual, we roll out of bed and make our way down the 4 flights of stairs as the ancient elevator wasn’t working.

Today we make our way over to Seattle, our very last drive in our little brown car. It was a somber 3 hours, no more long lonely countryside roads, no more busy highways and trying to figure out just where our GPS (Michelle) was telling us to go…

She was a bit of a confusing at times, always telling us to turn off one too early.

The traffic was heavy the whole way in, very happy to finally make the turn off to our street we get yet another epic car park right out the front of our hotel, score!

We get out of the car and I don’t know if it was because we were starving, but we immediately smell the nicest pizza we’ve ever smelt and head straight in and order up. It was fairly epic and the waiter was a champion, a great start for Seattle!

The hotel was awesome, just a little room with industrial features and a big window that opens up to the street, our bathroom and showers were shared but they were some of the nicest ones we have seen so far and our room was right next to them anyway.

We head out for a spot of shopping, Linnie’s thongs had died so we needed to get some new ones for the cruise and Hawaii.

Also, we stopped by a famous Farmers Market which is known as one of the longest continuous farmers markets in America.

A lot of walking around and one pair of shoes later, we wander over to the cinema and see Southpaw, which was a damn good movie. One of the best we had seen for a while.

With time getting on after the movie we were once again hungry little tourists, we find a nice looking Italian restaurant and get stuck into our favourites, spaghetti bolognaise and lasagna and a ton of bread that just kept being brought out by a very strange waiter whenever we emptied the basket.

We finally make our way back to the hotel, it was a very warm night so we had to sleep with just a small table fan blowing on our faces, a bit of a change from tents and having to rug up.

Where We Stayed in Seattle