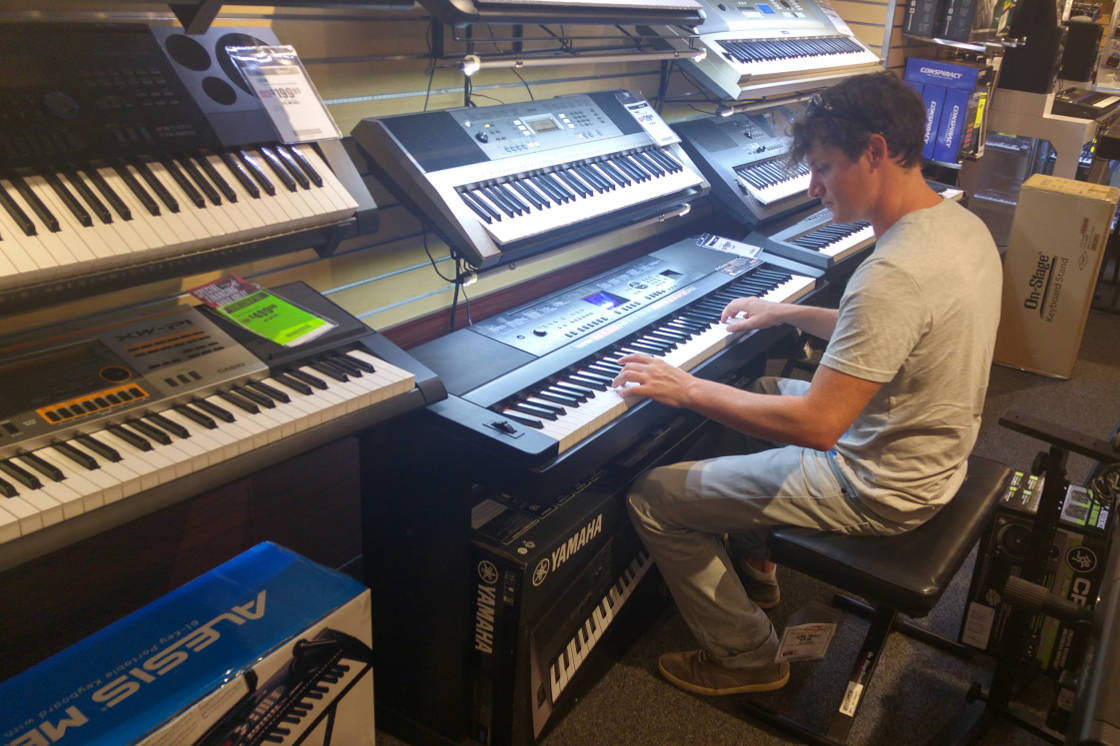 We awoke early at 7am, wide awake, which was strange given we didn’t get to sleep until nearly 2am.

Los Angeles was 3-hours behind the Dominican Republic, so perhaps there was a hint of jetlag? Ah well, it meant an early start to what was our last full day of the trip.

Downstairs we headed, deciding to hit up the buffet breakfast. We discovered the buffet was $26 USD each, plus it was shithouse, with barely any variety at all. So we left disappointed and still hungry.

We then decided to call an Uber to head out to Hollywood, but the journey time said 1h15m which was nuts. To be fair, it was early Monday morning when everyone was heading to work. Damn Los Angeles traffic!

In the end we went back to the room for an hour, then tried Uber again. This time was much better, taking just 35-minutes or so to get in.

Our first stop was the Sam Ash Music Store, which we had visited on the first day of the trip. Adam wanted to test out the digital pianos that Mark had recommend on the cruise.

There were two that he liked, the Casio PX-160 and the Yamaha P-115. We worked out that they were a good price compared to Australia, and also that we had free shipping if we brought it back on the plane.

We couldn’t buy a digital piano, could we..?

After playing around for a while, we ended up leaving and heading to Jimmy Johns for lunch, for the final time. This was about the fourth time we had been to this Hollywood Jimmy John’s.

While we were eating, we read some reviews on the digital pianos and decided that the Casio one appeared the best fit. We tossed up whether or not to buy one, but we still undecided.

Next we decided to walk back to Hollywood Boulevard for some exploring. We randomly found a Pandora store which Linnie was excited about. It meant she could buy a new necklace to replace the one she lost in Punta Cana.

The guy serving us was super nice and we picked out two little charms, a round silver one and a little red apple. It was adorable.

We also noticed a Dave & Busters just above the Pandora shop. Remembering all the fun we had at the Austin one last month, we decided to hit it up for some nostalgia.

Linda’s favourite Walking Dead game was there, as was classics like Mario Kart, basketball, 3D Pacman and others. We also watched Chelsea almost wrap up the EPL with a 3-0 win over Middlesbrough on the big sports screens.

With the day getting on, it was time to make our way to CBS Studios for the James Cordon show. This was the main reason we came back to LA for the day.

We grab an Uber with a super nice bloke and get dropped off next to a big queue of people waiting.

Turns out there were a couple of Australians behind us in line that we got talking too. There were another couple as well from Essex, who had just gotten back from living in Australia. A small world!

Given it took over an hour of queuing and waiting to get in, it was handy having some people to chat to.

Unfortunately we got crappy seats on the side, but it was still an ok view. After what seemed like an eternity of listening to the warm up guy and clapping and yelling, the show was finally ready to start.

It was bizarre seeing James Cordon live in the flesh, after seeing him so many times on TV in the past.

The show itself wasn’t bad, but we didn’t get to see the greatest guests. He had Caitlyn Jenna and Michael Weatherly on, as well as LP (who..??) performing live in the studio.

After the show, the seats we had turned into a blessing as we actually got a high five off James as he was walking off. This made us happy!

By now the time was well after 7pm, so we headed back to Hollywood Boulevard to the Buffalo Wild Wings that we’d eaten at so many times in the past.

Having eaten crap food at the resort all week, it was nice to get some “good” food again. We use the word good there relatively, as it actually wasn’t that great.

In fact, they even brought out the wrong meal to Linda. A beef patty rather than the black bean one. We watched the Golden State vs Utah match, as well as played some online poker on the little tablet screens that were on each table.

After tea, we headed back to the Sam Ash Music Store. We’d decided to buy the digital piano!

We put down the money, played around again on some expensive keyboards while we waited for the guy to get our piano from the warehouse, then we were on our way.

There was one slight problem though. The box was really long and we had to get it all the way over to the other side of town.

The Uber we called was a little sedan, but it managed to fit by millimetres across the back seat, on Adam’s lap. We’d gotten lucky!

Our drive was named Levon and he was super nice. We talked about heaps of things, especially sport, and the drive went really fast with little to no traffic on the way. Very rare for Los Angeles!

All in all, it was another great day. Tonight was our last night sleeping in the country, so we were a little sad now given that it had now sunk in we were leaving tomorrow.