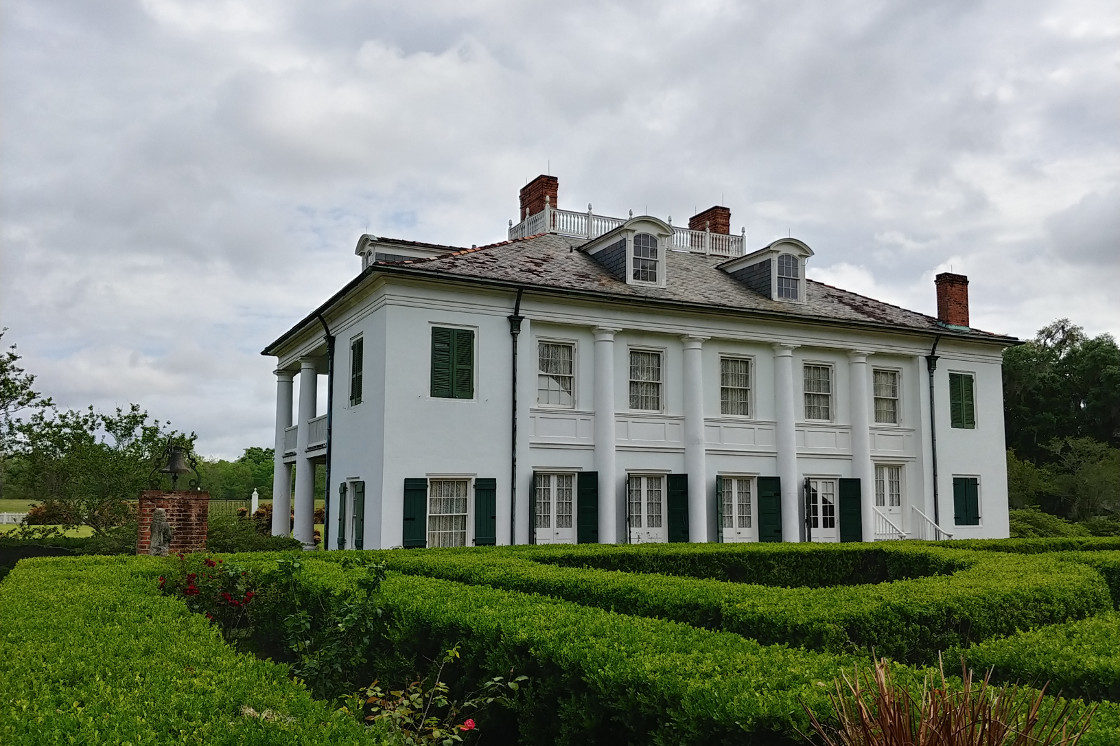 Today was the day we head to the plantations around the deep south of New Orleans. We wake at 7am for an early start and after chowing down on breakfast we wait out the front of our quirky hotel until we see the min bus and pile on.

As it turns out, our driver was a pretty epic tour guide with a wealth of knowledge about everything New Orleans.

In the hour it took to get to the plantations, we were schooled in the management of flood waters, the history of the Creole and Cajun people as well as explanations of pretty much everything we drove past.

I think he may have done this tour before, it was like listening to a audiobook.

We arrive at our first plantation called Oak Alley. Not knowing much about any of these places except for what we saw in movies, we went in with an open mind.

After a ten minute wait and a visit through the gift shop, we head over to the main house and start our tour.

The house was quite impressive for its age, we get to go through each room all the while our new tour guide explains what it may have been used for. We pass though the lounge room, an artefacts room and a dining room which has a slave run fan to keep everyone at the table cool.

Then we go upstairs and see the bedrooms, nothing too big, infact the rooms were all quite small in comparison to the grandeur of the hosue. And then the guide makes the announcement that she is about to open the patio doors so we can see what we have all come to see.

We had no idea what she was talking about so we head out with great anticipation. It was the ‘famous’ Oak Alley oak trees that lined the path from the house to the Mississippi River.

While it was just an alley with Oak trees, they were quite impressive, these trees were old and HUGE. A couple of the trees had been inducted into the Oak Society and were even named after the people that run the plantation.

The tour over we head outside to the Alley and walk the length of the path. Continuing out past the property gates we get our first glimpse of the Mississippi rived from up over the bank.

There was a huge tourist steamboat docked there which would explain all the people around with lanyards on.

We wander around outside for another half hour until it was time for the next plantation, Evergreen.

Pulling up yet another huge alley of oak trees, our driver parks and lets us loose. This place looks familiar…. We are greeted by yet another guide, this one being VERY enthusiastic and happy to meet us all. (Turns out she works as an actor as well)

After a quick chat about the plantation she walks past a cemetery and two rows of slave quarters which were all fake and used in a tv show called roots and a movie that hasn’t even been released yet. She then led us to the outer kitchen where the slave cook spends all of her time.

We stop here for maybe half an hour while the guide talks and talk and talks and talks! There was even enough time for a cat to meander in, flop on the ground, get a few pats and move on.

Finally we move on and check out the main house. She walked us around to the front of the house and then the penny drops, this is the Candyland Plantation from the movie Django! Infact nearly all of the plantation scenes from the movie were shot here. How very cool!

The house was quite impressive from the outside with its sprawling double staircase and huge white columns which were only added to the house after the second owner decided to “Pimp my house” as our tour guide said.

He turned a small 3 bedroom home into a 3 level mansion by raising it up, adding a floor and all the grandeur at the front.

But walking inside, the house is quite small! Aparently he build it to look huge and impressive as you view it from the Mississippi, but in reality, it is just a modest house. Smart man.

We see a couple more locations where Django was filmed and even learnt that out tour guide was an extra in the movie.

She told us what it was like working with Quinten Tarintino and being in and around the movie set.

They would play music between scenes and everyone would dance to hip hop whilst still in the period costumes, she loved it.

After a quick tour of the slave quarters we get picked up by the bus. It had been a great tour, we learnt a lot about how a peaceful and respectful plantation was run with mutual respect from the slaves and owners. I only wish that this was the case at every plantation.

Evergreen mansion, famous for being used in Django

Where some of Django was filmed

Back on the bus it was time to head back, we nap nearly the entire way home until we get back to the hotel where we head up to the room and watch some Django scenes on youtube, so weird that we can place exactly where it was filmed even down to the tree stumps.

After a rest, we go for a walk to the French Quarter to take in the sights and sounds and end up getting sucked into watching some street performers. It was 3 and a half black guys doing all sorts of crazy things.

Our favourite thing was when one of them pulled his pants down a bit, lifted up his top and stumbled onto the road pretending to be blind drunk.

He held up traffic and even went to open the car door of a passing car, which the driver was not impressed with.

We wander around some more and make our way over to the Walk On pub where we decide to have dinner while watching the Cavs Sixers NBA game.

It turned into one of the matches of the season with the Sixers running out to a 30 point lead, then giving up that lead in the last quarter.

It went to the final shots of the game where LeBron had the chance to send it to overtime. He missed a free throw and then that was it, the Sixers held on to win 132-130 in a classic. Ben Simmons scored yet another triple double in his rookie season to add icing to the cake.