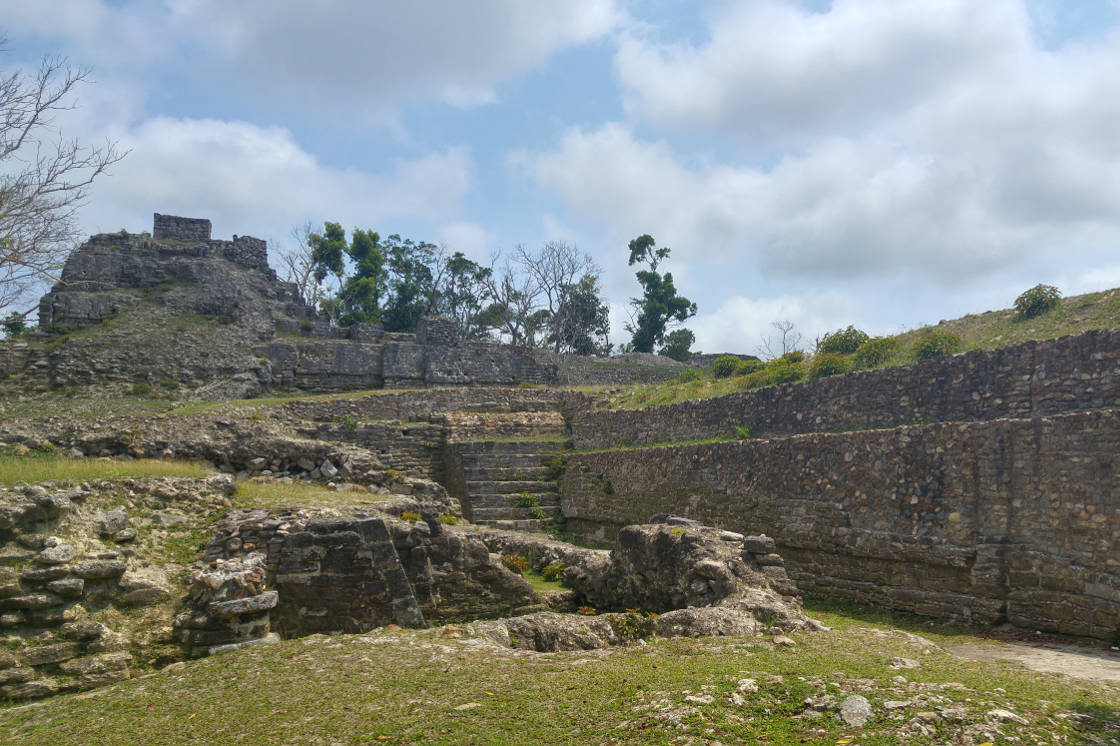 A Bumpy Ride in Belize

We awake again to the sound of someone grinding their giant fingernails down the side of the ship. What was going on?!

Today we port in Belize and plan to visit some Mayan ruins as it was going to be a scorching day. So with a big day ahead, we try and pig out on breakfast, but cant, as it was bloody awful.

After breakfast we head to the Alchemy Bar and grab ourselves a tender sticker. While waiting to be called out we cant resist another crack at The Walking Dead game in the arcade and get so involved, that we ended up having to scramble to get our things from our room with the announcer calling out our number.

Thankfully we have another proper boat to tender us across to Belize which turned out to be a 25 minute trip to the dock. The water wasn’t too choppy this time compared to the last tender, but Adam still managed to get queasy with the swaying.

Finally we made it to the dock and all piled out of the boat at a very excruciating slow pace. It was so hot and muggy out and without the cool breeze of the ocean, we were both feeling it and already starting to sweat.

Wasting no time, we head over to the tirade of tour operators all trying to rope in tourists and pick a nice lady who has a poster of the Mayan ruins, that’ll do!

For $40 each we get a ‘free’ city tour and jungle tour thrown in even though I’m sure you have to pass through here to get to the ruins anyway.

After 20 minutes of waiting for more people we are escorted to an air conditioned van (phew) and we set off. Five minutes into the trip, our driver pulls into a service station and fills up with petrol… Seriously? This couldn’t have been done before you picked us all up?

A rather long and drawn out hour later we arrive at the ruin site. Just as suspected, our ‘free’ tour of the city and jungle was indeed as we were passing through on the highway.. I knew it.

The driver, having driven like a man possessed, had made an already queasy Adam very car sick, so we were more than over joyed to have arrived. Before we make it to the ruin site we pass through the usual bunch of locals trying to flog off their local wares and bottles of water.

With no money to spend we bypass them and hit the ruins, already sweating heavily.

The ruin site was quite impressive. More like a compound, there was about eight different structures, some were slightly restored, others were very weathered. We got to explore and climb to the top of the pyramids and even stand of a table where they preformed sacrifices back in the day.

Our tour guide wasn’t very informative so we didn’t learn a hell of a lot, but it was amazing to see structures that were built over 1500 years ago.

Back in the bus, Adam gets given the front seat hoping that this will ease the car sickness and thankfully, after another LONG hour of swerving, abrupt stopping and listening to Spanish songs the whole way, it worked wonders.

Not wanting to hang around anymore, we scurry to catch the next tender boat and make it by two minutes. Adam feeling a little better didn’t suffer too much along the way and we were back up on the ship and in air conditioned comfort.

Next we do what we always do after getting back on the ship, eat, and with the food still not improving we decide to head to the Mexican part and get a veggie burrito made up which wasn’t too bad.

Exhausted from our long drive, we grab our books, find a very cool pod to lay in, and read while we wait for sail away which come up pretty quick. We were back out at sea again and hopefully heading away from the muggy weather.

It was sports trivia time down in the sports bar and having missed nearly every trivia this cruise, we cant miss this one. Halfway into the trivia, which was hosted by an Aussie crew member, we realised that we were never getting any answers.

One question was who got picked number one in the 1998 NFL draft.. Seriously? We kept on with it though but there was no hope of us even getting 3 answers right, it was all american sport history questions. Ugh.

Having had such a late lunch, we weren’t really hungry for dinner, but we head there anyway knowing that if we didn’t, a shit buffet would be all we would get instead.

The food and the service was again sublime. We left the restaurant feeling so so full and bloated from eating too much that we had to retire to the room to lay down, it was madness.

Feeling like absolute blobs, we throw on our runners and take to the walking track and pump out 25 laps taking us about 50 minutes in total. We had an old couple that we lapped over and over which acted as our pacers and kept us going at top speed.

It was a bit of a battle as the wind down one side of the ship was blowing so hard, it was a huge effort just to keep on our feet, easily the strongest winds we had felt.

Feeling a little better, we head back in to watch the Celtics vs Bulls match until it was time to head over to watch Eric (our cruise director) doing a magic show..

This oughta be good. It didn’t turn out to be too bad, hardly calling it magic it was more like taking the piss out of unsuspecting guests and getting a few laughs. He was fast becoming our favourite cruise director.

With the night getting on, we decide to hit the hay, tomorrow we arrive in Mexico!

Where We Visited in Belize