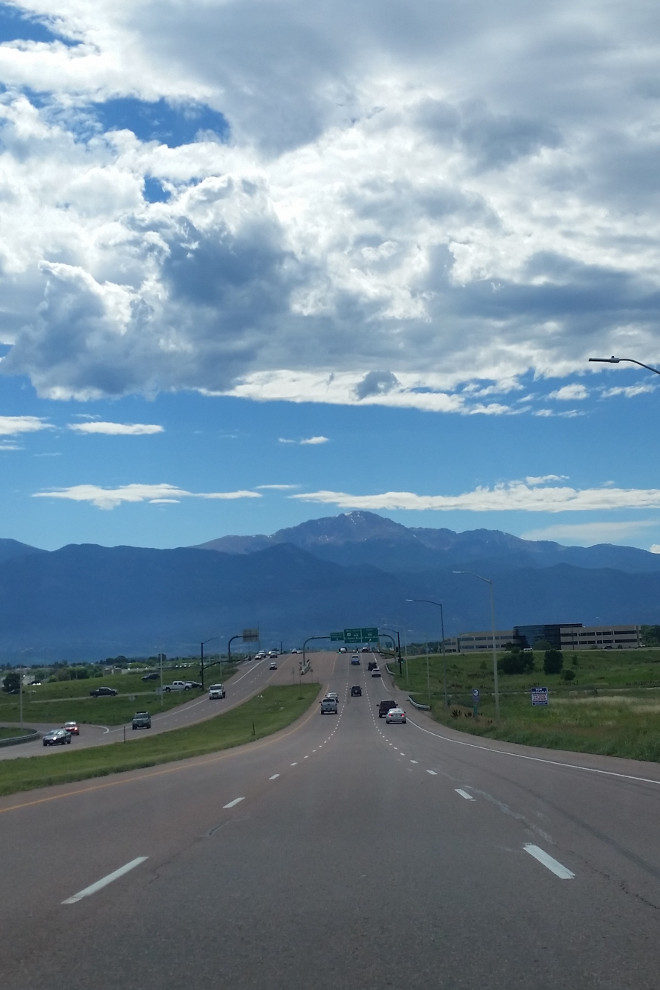 A Loooooooooong Drive to Colorado

Our last morning in our lux apartment and we were sad to be leaving, up at 7am we had to get an early start as we had a 10 drive to Colorado.

Having packed majority of our things the night before we were up and out negotiating all the different keys we had been given for the door, the garage door and then dropping the back in the lock box.

With the car seemingly packed we had made it out of the city and onto the freeways when Linnie noticed shoes flying out the back of the car through the rear view mirror, silly Adam left them on the roof and they happen to fall in the worst possible spot, between the on ramp and the exit…

But he still chased them down, risking his life for his precious Asics.

After punching Buena Vista into the GPS we were happy to learn that we scored a free hour due to the time difference, so technically the drive was only 9 hours and not 10, whoo hoo!

After 7 hours of highways, sleepy towns and the new War of the Worlds featuring Liam Neeson blaring through our speakers we stop at the only town big enough worth stopping at, Limon.

Limon was basically a big dustbowl of a town, with a population of just 2000 and pretty much full of bogans. Given it was one of the biggest cities on our route between Kansas City and Buena Vista, you kind of get the idea this is why we opted for a 10hr drive rather than having a stopover.

With not much on offer food wise we stop into the local IHOP knowing that they would have something edible, pancakes and a club sandwich.

We were highly entertained while we ate listening to a bunch of farmers bitch and complain about Obama and how he is ruining the country because she can’t get 50k out of the bank at one time, she even tried to sue the bank… Honestly.. Bogans.

Happy to get the hell out of there we continue along our merry way for another 3 hours and FINALLY in Buena Vista!

We stop by Wilderness Aware Rafting who are the company that will be taking us on a 2 day rafting adventure tomorrow, to sort out our rental gear so we were all organised.

Pretty exhausted by now we check into our campgrounds just a few more minutes down the road and get the tent set up and then drop down onto our bed for a well-deserved rest before heading our for dinner to the local steakhouse.

The steak here was a little weird, while it tasted amazing, it looked like it hadn’t seen a frying pan in its lifetime…

Luckily for Adam he ordered the veggie lasagna or I don’t think he would have eaten a thing being a picky carnivore.

Pitch black now it was mesmerising to look up and see every single star the eye could see. The sky was dark, dark blue and the stars just popped right out as bright as a million little torches, you could even see the Milky Way as clear as anything, this is why people camp.

As it was only 10pm, we decided to watched a movie called Religulous on the laptop. It was a documentary type movie about the cancer of this world known as religion, hosted by genius himself Bill Maher.

The movie was basically him going around the country speaking to religious people who genuinely believe in sky fairies such as God, and shutting them down with their own logic in a very comical way. Any type of show that takes shots at religion is fine by us.

All zipped up in our sleeping bags it was definitely time for bed, the alarms set (yes, both phones, just incase) for 7:30am so we would be on time for our rafting adventure that we were VERY excited for!

More Photos from our Drive to Colorado

Where we stayed in Buena Vista