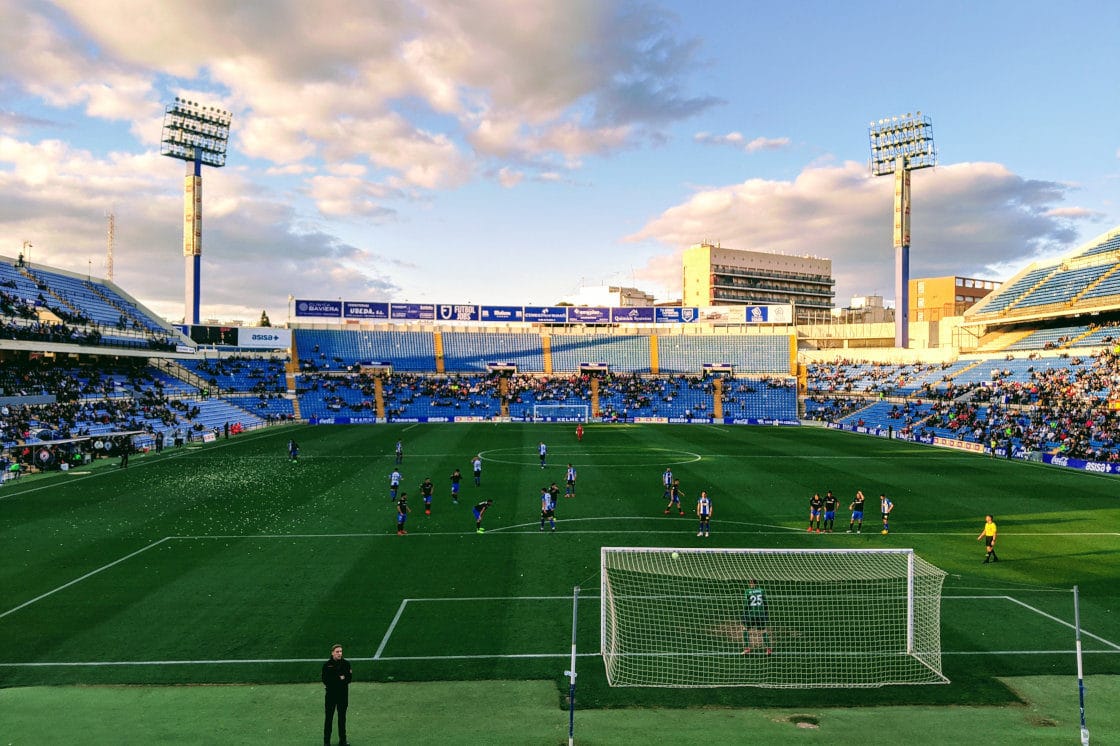 And just like that, week 2 in Alicante was now upon us. We got up to more adventures this week including a bike ride, football match, and more lounging around at the beach.

This morning was a rare morning of getting up early, with the alarm going off at 8:30am. Well, that late usually, but early for our Alicante trip! Today we had a bike ride around the city to prepare for.

We met our guide, Gabby, at around 10am and she was super lovely. She apologised to us for her poor English, but we found her easy to understand. Gabby was a friend of our Airbnb host, so we got ourselves a nice little discount.

Our bike journey took us all over Alicante to Gabby’s favourite spots, about 4 hours in total. Highlights of the ride were Parque el Palmeral, which was a beautiful park full of palm trees and a waterfall.

Another highlight was the coastline ride which took us all the way to San Juan Playa, a beautiful beach just up the coast from where we were staying. This is a spot we’d definitely be heading back to later in the week.

Gabby also took us Parque Pau 5, which had a tree full of ribbons. It looked lovely, but it was also sad, as each ribbon represented a pet dog that had died. Owners would hang a ribbon to the tree as a memorial and it was quite special.

After the ride we thought we’d head to a bakery and get a little dessert. We discovered a little apple crumble thing which looked awesome, but the taste was anything but. It was like a sugarless apple crumble, but without the apple and the crumble just sat on a bit of bread. When you finished eating it you had no saliva left in your mouth. Bloody foul.

We ducked into that vegan grocery store from the other day to pick up some ingredients for a stir fry. Before making tea, we took Linda’s laptop in to a shop to be prepared, the pesky battery charger slot shat itself again.

This proved more difficult than we’d had hoped, given we barely know Spanish and the guy serving us didn’t know a word of English. We left the laptop with him, fingers crossed it works out!

To end the night we watched the first episode of Better Call Saul – Season 5, which had dropped earlier in the day.

Today was a bit of deja vu from the weekend. Up late, chilling out, making a salad baguette, then a day at the beach.

We got to the beach about 12:30pm and didn’t move until after 4pm. It was the nicest day of the entire trip so far. On the way back we got some ingredients for tea, then spent the rest of the evening up on the roof top watching the sunset.

For tea we had spag bol, then afterwards head out to watch the Champions League. We found a pub that had the Napoli vs Barcelona game, but it was harder to find the Chelsea vs Bayern Munich match.

At half time we got bored of listening to the game in Spanish commentary, so head back and watched episode 2 of Better Call Saul. Another awesome day of relaxing!

After another day of relaxing yesterday, we thought it was time to get out and about again. We finally decided to go for a walk to the mysterious castle that we’d been looking at from our roof top all week.

We decided to head off after lunch (a scrumptious baked potato), starting with a little walk to Castell de Sant Ferran. We got a great view of the city, but they were doing construction works, so we unfortunately weren’t able to check it out properly.

Next we walked through the old town on our way to Santa Barbara Castle. We had a good stroll around the old town trying to find the stairway to the castle and starting the looooong walk to the top.

It was a long way up and the sun was beaming down, so it was good to get a bit of exercise after days of lounging around. All in all, it took about 45 minutes to get to the top.

The castle itself was quite substantial. It was first occupied back in 711AD and was gradually built over time. We got amazing 360 degree views of the city and strolled around up the top for about an hour, checking out all the different rooms. On the way back down we grabbed a coffee and a bag of chips at the cafe.

On the way back home we stopped by the supermarket, which was becoming a regular stop for us now. Tea tonight was butter tempeh and it was just as delicious as back home.

After that we headed out to see the last night of the carnival. It was some festival dedicated to sardines and the beginning of lent or something. We couldn’t make much out, but it was pretty wild. It seemed like a good excuse to let off fireworks again.

Today was another spent at the beach, much like what we’d been doing for most of the last week. We had a baked potato for lunch, then headed down just after midday, not moving until after 4pm.

As usual, the water was freezing cold, but we still got a swim in. The wind started to pick up later on in the day and blow sand around everywhere, so we decided to call it a day.

Linnie was super excited today, too. It was time to get her laptop back from hospital! We got some supplies from the supermarket and then picked up the laptop. You couldn’t wipe the smile off her face!

Tea tonight was the same as last night – reheated butter tempeh. Then we spent the night doing what we normally do, catching up on trading, watching shows and reading.

Today was more or less another lounging around day. Most of the morning and early afternoon was spent up on the roof top reading, then we headed into town around 2pm.

We didn’t get up to much. First on the call was to find an ATM that had no withdrawal fees (it was damn expensive to get money out over here, over $10!).

Next we headed down to the yacht area and found an awesome spot by the water where we read our book. Adam got some email notifications that the US market was being hammered again, a familiar story this week. Almost all positions had been stopped out now.

We then explored the yacht area some more, which was surrounded by very expensive yachts and poncy restaurants. Then we headed back home via the supermarket, as usual. Tonight was home made burgers and chips.

Later on we watched episode 3 of Hunted, and then called it a night. Yet another awesome day of doing nothing!

Our plan today was to walk to San Juan Playa, the lovely beach that we rode to on our bike ride Monday just gone. The weather forecast had today as being the hottest day over the next week, so we thought it’d be the ideal time to go.

We got up nice and early (8:30am being early for us now!) and made our way through a part of town we hadn’t seen yet. Along the way we met a new friend – a stray cat named Kyro! He came up to us and sat in our lap and we gave him a good pat, before continuing on to the beach.

Once we reached the beach we were in need of a toilet, but it turns out public toilets are hard to find in Spain! Then we spent another half hour looking for a supermarket to get some lunch items.

Next we found a nice spot on the beach where we planned to settle for the rest of the afternoon. But turns out this beach is windy, damn windy! On top of that, the weather had turned a bit sour and was getting cold, so we cut the beach short and headed back home.

All in all, we walked about 23km total over 5hrs, including 36,000 steps. By now we were completely stuffed and settled for having Breakfast 2.0 for tea.

Still feeling the effects of the monster walk yesterday, we had a sleep in and basically spent the entire morning and afternoon up on the roof top.

The only plan for today was to head to a local football match at the stadium about half a km away. Kick off was for 5:30pm, so we headed off around 4:30pm to go suss out how much tickets were worth.

Hercules CF were the local team and they were taking on Andorra CF. It was a third division match at Jose Rico Perez Stadium. We learned that Hercules were dead bottom on the table and facing relegation to division 4, so we weren’t expecting big things from them.

We discovered that the tickets were a reasonable price, getting the cheapest ones available at 10 Euros each. Surprisingly, the stadium was fantastic for what was a third division team.

Despite the match ending 0-0, it was quite an entertaining game. The home side missed a penalty right in front of us, then missed another open sitter later on in the match. How they didn’t win this match I have no idea.

Another interesting thing was that as the evening was getting darker, they refused to turn the floodlights on. The fans had to flash the torches on their mobile phones which eventually led to them turning the lights on.

After the match we headed back home and made some mushroom pasta for tea, then headed back out to watch El Classico at Irish Murphies. That was another exciting match, with Madrid winning 2-0.