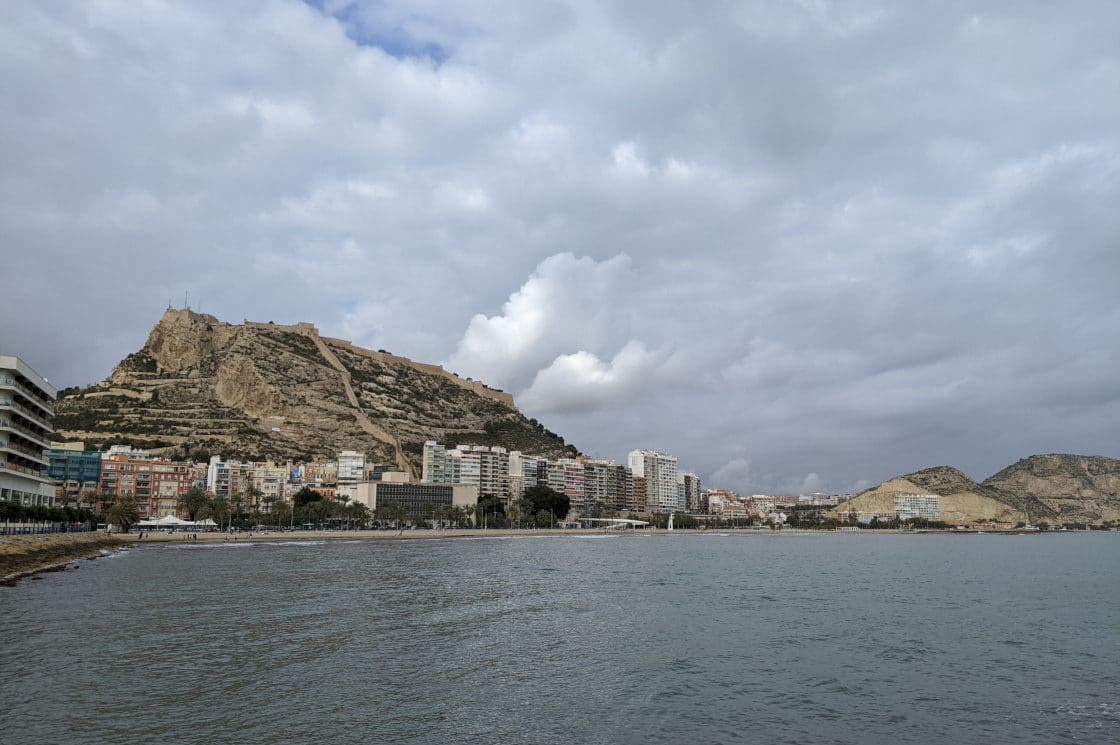 Our adventures from the first week in Alicante.

Week 1 in Alicante was finally here! We kicked off our first morning with a sleep in, followed by lounging around in our new apartment. It is damn nice here and a month is going to fly by.

As we prepared to go for a walk, Adam ripped his one and only pair of pants, so we now had a job to do. Find a new pair of pants! We found a department store named El Corte Ingles, which was basically a poor mans Myers.

Luckily they had a decent pair of pants that were easy to find. A further bonus was that they were on discount, plus we got a further discount because as foreigners we don’t have to pay local taxes. Score!

On the way back home we grabbed some lunch, grabbing a salad roll and croissant, plus got some groceries on the way back. It was starting to rain a bit now, so we just went back home.

The rest of the night was spent chilling out in the room, enjoying our amazing views of the city. We made spag bol for tea and went to bed late. This is the kind of life we could get used to!

This morning was much the same as yesterday; sleep in, lounge around and do nothing. It was a nice warm morning, so we got some sun on our roof top.

The day was starting to roll along now and we felt it was probably a good idea to get out and about and do some exploring. We decided on going down to the beach area for a look.

Alicante is an amazing city. You have a huge medieval castle overlooking the city and a beautiful coastline. We walked up and down the promenade and found a pier that gave great views of the city.

Afterwards we found a little vegan grocery store and stocked up on some items for tea. We finally found some tempeh, the first time we’d seen it on this trip, so that made us happy.

By now it was starting to get cold, so we made our way back to the room again. For tea, we reheated some leftover spag bol from last night and it was just as nice.

The plan was to head back out around 9pm to find somewhere to watch the Champions League soccer. Valencia were playing Atlanta, so we thought it might be busy given we were in the Valencian area of Spain.

But somehow, after all the resting we’d been doing, we were tired, so opted to stay in and do nothing. This was turning into a very restful holiday and we were loving it.

The morning started like all the other mornings in Alicante so far – getting up late and chilling out on our sunny rooftop.

Feeling a bit hungry, we walked down to the Central Market to grab some ingredients for lunch and also for tea. Unfortunately for us the fruit and veggie area was right next to the seafood area, and damn it stunk. We had to go around the back way to avoid the stench of rotting fish.

We made a salad roll using baguettes for lunch and ate it up on the roof top. Then after some more lounging around, we made our way down to the beach area to grab some drinks at one of the cafes on the beach promenade.

This cafe was great, with lounges right on the beach front. We stayed here for a while, but it got shady when the sun went away and got cold pretty quick.

Tonight for tea we made a stir fry with the veggies we got from the market yesterday. It was one of the nicest meals we’d had on the trip so far and we were happy to be eating lovely home cooked meals again. It was good for the bank balance not eating out too!

After tea we thought we’d go check out a parade that was kicking off a 4 day festival. We weren’t sure what to expect, but it wasn’t bad fun.

It was basically a bunch of dudes jugging fire and letting off fireworks. But the fireworks were so loud it made our ears rings. It sounded like World War 3 was kicking off.

We grabbed some chocolate from a nearby supermarket and then made our way to the spot where the end of the parade was. They let off some more fireworks and partied for a while.

After all those shenanigans, we made our way back to the room. We are now finally starting to ease in to Spanish life, which seems to be going to bed after midnight and doing nothing until after midday. A very laid back life indeed!

We’re now well and truly getting use to Spanish life, getting up late and going to bed late. This morning we get up around 10am with no real plans for the day other than chilling out.

Our original plan was to head down to the beach, but given today was a little on the cold side we decide to change our plans. We thought maybe it would be a good idea to go to a walk to the shopping outlets a little out of town.

Before we head off we grab a baguette and make a salad roll, then make our way to the outlets. It was a 50 minute and an opportunity to see another part of the city.

As it turns out, it wasn’t the most desirable part of town. It reminded us a lot of Los Angeles and the shopping outlets were much the same as the American outlets.

We spent about 45-minutes walking around and the only thing we bought was a croissant. Then it was the long walk back home where it had become a lot cooler outside.

At 6pm we thought we would try our luck and try and get some concert tickets at the auditorium next door to our Airbnb. There was an orchestra playing movie theme music, but unluckily for us it was basically sold out. The only seats they had were single seats at 39 Euros a piece.

We hung around to see if there would be anyone trying to sell tickets, but no such luck! Linnie spent most of her time leaning up against what seemed to be the warmest wall in the world!

Feeling hungry after a long day of walking, we head back into town to find something to eat.

Tonight’s menu was Italian food. It had plenty of vegetarian options so we thought we’d take our chances. Adam got a pizza and Linnie some pasta, along with some awesome garlic bread.

After tea we headed back home and called it a night.

Today’s plan was to spend a day at the beach, then head to the festival later on this evening in Alicante old town.

Like yesterday, we made a salad roll then took it to the beach with us. Before we left, we put on a load of washing, washing our sheets and towels, then walked to the beach.

We got to the beach around 1pm and didn’t move for about 3hrs. Adam took the plunge and had a swim in what felt like Arctic water. The fact there was only about three people in the water was probably a warning sign.

It turns out that thing start getting cold in Alicante around 3-4pm so we decide to head back home and have a shower. Unfortunately Linnie started feeling ill, so she spent a few hours resting.

For tea we had homemade burgers and Linnie still wasn’t feeling great, but decided to head out anyway to go check out the festival.

They had shutdown the main street, kind of like a Sturt St equivalent, and turned it into a giant party. There were people dressing up in costumes and people hanging around everywhere having a good time.

The live music was due to start at 10pm but with Linnie feeling crook, we were never going to make it. So we thought we’d head back and have a quiet evening.

Given yesterday was a great day at the beach, we decided to do the same thing again! Now that we had learned things get cold between 3-4pm, we decided to set off around 11am.

Today was literally the most lazy day we’ve had on the trip so far, but it was also an awesome day. We pretty much spent the day lying in the sun, then made our way back home about 3:30pm.

For some reason the supermarkets were shut (things seem to go on siesta on Sunday’s) we stopped by our corner store and got a few supplies. We ended up having breakfast again for lunch.

After lying around at the house, we went out to try and find an open supermarket and grab some ingredients for tea. We found one eventually and got ingredients for burritos.

The rest of the evening was caught catching up on the blog and then getting an early night. Not much else to write about today!