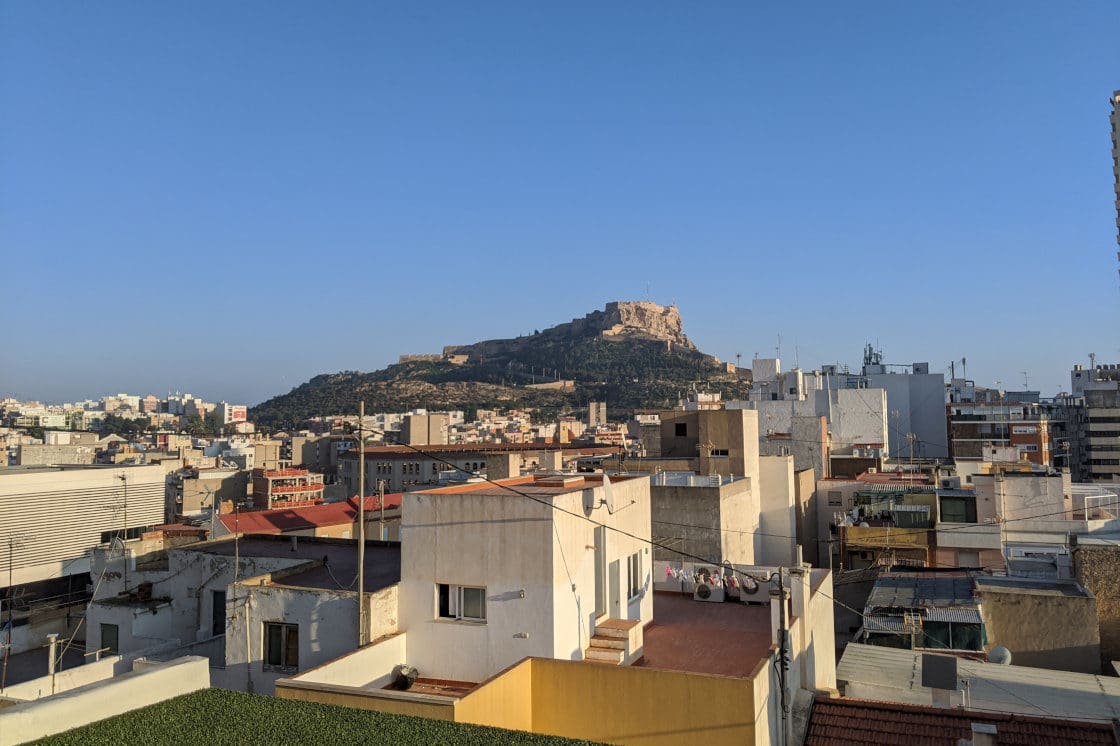 A holiday within a holiday

Today was exciting for two reasons – one, we didn’t have to sleep in a blindless room anymore and two, we were off to Alicante to start our holiday within the holiday, an entire month in the one place.

Never before had we ever stayed in the one place for longer than a week, so it would be great to be able to just drop everything, unpack out suitcases and chill out.

Before all this though, it was time for one last venture around Valencia. Such a pretty town, a mini version of Barcelona but with more of an upper-class touristy vibe.

We meander our way up and down streets, through old town and over into the big squares with impressive fountains. It wasn’t quite warm enough to be able to smell the perfume of the orange blossoms that were planted all around the city, but our train to Alicante wasn’t due until around 2pm so there was still time to get in one last whiff.

The central market was on so we go inside and look for more dried apples, hopefully, cheaper ones this time, and end up buying a bottle of freshly squeezed orange juice, we couldn’t leave without trying a Valencian orange after all.

It was, without doubt, the nicest orange juice we have ever had, the perfect combination of sweet and sour and just the right amount of pulp. Delicious!

We head back to the “penthouse” and pack up our stuff, taking down the useless towels from the windows and piling them onto the sofa. Enjoy washing all of those!

Hauling our bags down yet another loooooooooooong staircase, we make our way to Starbucks while we await our train while getting some work done.

Time to go, we make a detour down a long street with orange trees and inhale a big waft of perfume, and then make tracks for the station, happy to have one last heady smell of Valencia before we go.

One again the train station defeated us and we had to ask for directions, 3 different times. This was not because we were stupid (not entirely) but because the attendants would just point and throw out a heap of incoherent Spanish. At one stage we thought she said our platform was in an entirely different building!

In the end we worked out we had to stand at a big steel barrier and wait to be checked in. No signage at all… What were we mind readers?

Our train arrived and we settled in for the 2 hour trip, Linnie once again watching Netflix and Adam once again chuckling away to Longmont Potion Castle. Seriously, at one stage it sounded like he was crying.

Even though the train was close to half an hour late, we arrived nearly half an hour ahead of schedule. This was a little annoying as Nuria, our host at our Airbnb in Alicante, offered to come pick us up at the station.

But she didn’t mind the earlier pick up time and she was loading our bags in the car for us in less than 15 minutes. Finally, an Airbnb host that gives a shit.

Nuria was also lovely enough to give us a driving tour of Alicante before walking us up to the Apartment. Once again though the room was on the top floor which meant another narrow loooooooooooong trek up a staircase. But it was all worth it for the amazing view of Alicante’s claim to fame – The Santa Barbara Castle.

The apartment was just as good as the photos. Linnie has had the photo of the outdoor area as her laptop background for months while waiting for the trip, and it was finally here and happening.

After getting the tour from Nuria and her daughter we unpack our things and head out to explore. Our first stop was to the beach promenade where we had our hearts set on a hot chocolate, which come recommended by Nuria. We walk on in and wait, wait, wait, but no one served us!

What was this? Figuring they don’t do take away we walk out and opt to try again another day.

We make our way to the beach not knowing if it would be sandy or pebbly, and to our delight, it was long, white and sandy! Horray!

It was starting to get late at this stage so we go back to the promenade and find a lovely little Thai place for dinner where we scoff down a satay dish. You can never go wrong with Thai.

Full and satisfied we wander back to our apartment which was about 15 minutes from the beach in a quiet residential area, which meant we would have peace and quiet for the first time in many nights. And best of all, the apartment had electric roll down aluminium blinds aka total black out. It was heaven.

We admire the view of the castle at night all lit up from our rooftop balcony and even light some candles to add to the magical scene. But it was bloody cold so we didn’t last too long.

Tomorrow was going to be the first day of doing nothing but relax and unwind – it has been a long time coming!

Where we’re staying in Alicante